From The Cutting Room Floor
< Proto:Pokémon Diamond and Pearl
Jump to navigation Jump to search

This is a sub-page of Proto:Pokémon Diamond and Pearl.

This kiosk demo of Pokémon Diamond and Pearl was playable at GDC 2007 and later, stores, prior to the game's official English release. The game's world is not fully explorable; instead, the player has ten minutes to explore and battle on Route 203 with a preset team of three Level 30 Pokémon: Roselia, Mime Jr., and Lucario.

As the demo was created and showcased after the Japanese releases, it contains scant differences between the final game - many of them are related to the localization, or to the area specific to the demo. Hacking the game, you'll quickly find out nearly the entire game is accessible.

Route 203 was slightly changed between the demo and the final version. In the demo, a fence blocks access to the grass on the leftmost part of the route, and the grass surrounding the trees on the middle part of the route is not present. This effectively prevents the player from encountering any wild Pokémon during the demo. If a walk-through-walls cheat code is used, wild battles work perfectly fine.

These messages are used only in the demo. They do still exist in the final game unused.

Upon starting the game, Barry says this and walks you to the route...

Then tells you this and sends you on your way.

When you enter the route, the scientist stops you and tells you this.

Professor Rowan says this when you reach the end of the route and talk to him. Talking to him triggers your Roselia to evolve into Roserade!

Lucas or Dawn say this when you talk to them. The game then resets.

If you take longer than ten minutes to go through the route, it displays this message, then resets.

If all your Pokémon faint, you get this message, and the game resets.

The demo contains the game's entire script, unused as you can not leave Route 203. While the majority of changes were simple capitalization fixes, there are a few notable differences between this one and the one in the final game.

A banner used on the title screen to identify this as the demo version of the game. This banner exists, but is unused, in the final game. 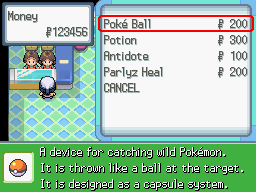 The demo starts you with 123,456 Pokémon Dollars, but since you can't see how much money you have without cheating (such as using a walk-through-walls code to get to a Poké Mart and shop), this is never seen in normal gameplay. You're still given money by trainers in the demo area, though.

Inside the ROM FS, some NARC archives that in the final are named *_release.narc, are named *_trial.narc in this kiosk demo.