From The Cutting Room Floor
< Proto:Pokémon Gold and Silver
Jump to navigation Jump to search
This page contains changes which are not marked for translation.
Other languages:
English

This is a sub-page of Proto:Pokémon Gold and Silver.

On November 15, 1997, an early playable demo of Pokémon Gold and Silver was shown at Space World '97. Long considered lost treasures, on May 26, 2018 an anonymous user unexpectedly dumped ROMs of the elusive demos online. A more in-depth explanation as to how these demos were dumped can be read discussed here.

Documentation on this prototype can be viewed in this Google spreadsheet, as well as this repository. May Game Freak have mercy on our souls.

There is a total of four separate ROMs which consists of two Gold and two Silver, two Debug and two NonDebug. Each archive contains two ROMs: the original ROM, and a version with a fixed header that allows it to run on normal Game Boy hardware and most emulators.

To fix a ROM yourself, open it in a hex editor (such as HxD on Windows) and edit the following:

Because this is a demo, there are several restrictions in place that can't be surpassed without using the debug menu or the use of hacks/cheats.

Although not completed yet and normally inaccessible, tidbits of a story mode do indeed exist within the ROM. These can be accessed by changing 0x5585 from 0x8D to 0xB9. The data change will also cause serious issues with movement in some emulators, which may usually result in a crash.

Only the introduction up to the meet-up with the rival appear to be fully coded and playable. However, the teams for this rival battle are stored in an older format which the game fails to read correctly, resulting in a near-unwinnable battle.

At this point in development, Pokémon Gold and Silver were still being developed for the original, monochrome Game Boy handhelds, with Super Game Boy support for colorization. Development shifted to the Game Boy Color in mid-1998.

A lot of the background layouts were already seemingly finished at this point (as judged by the planned release dates) while some had different palettes, some of which match up with the final games when played in Super Game Boy mode. 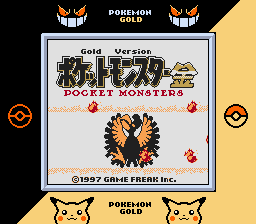 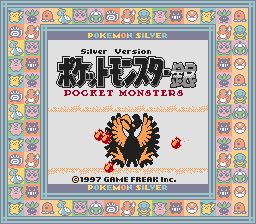 Omanyte can be seen in the intro instead of Shellder. The detail of the ocean floor was also simplified.

The Magikarp were redrawn to be on-model.

The Lapras sprite in the intro was also redone, with the most notable differences being the head and shell. It also was given more animation in the final, with less of a "bob" as it paddles in the water.

Details on the trees and bushes were removed. Shading was removed from Pikachu and Jigglypuff. Pikachu attacking Jigglypuff does not use unique frames like the final game.

In place of the Johto starters, the final part of the intro uses Blastoise and Venusaur instead. Charizard's silhouette is also a bit different.

Finally, like the silhouette, the Charizard sprites at the very end were redrawn for the final game.

Time mechanics are in this build, and the lighting effects are obviously different due to it being built on Super Game Boy hardware at the time.

In comparison with daytime, the colors seem to be slightly darker than lighter, giving it more of a feeling that it was very early in the morning.

The battle HUD is almost exactly the same, except for the lack of color since it used original Game Boy hardware. When using a Super Game Boy, color tinting is added just like in Red, Green, and Blue.

The inventory was in the middle of a redesign during the demo, even though the promotional video seems to show a much earlier (and buggier) version of the menu. It was one of the interfaces that got changed most near the end of development.

The summary screen for the Pokémon didn't get much of a redesign at all, and stayed almost exactly the same if not for a few menu button arrangements. Oddly enough, the English version of the summary screen takes the base from the Generation I games due to text spacing.

Much like the Inventory shown in the 1997 SpaceWorld promotional video, the Pokémon Storage System was in the middle of being reworked. Pokémon were arranged in a list via species, name, level, and gender. It would later be revamped in the final release, complete with the image of the caught Pokémon shown at the side and the named Pokemon replacing the species.

The Trainer card is mostly the same, except the play time isn't tracked and the Gym Leaders were moved to another "page". The Gym Badges also had completely different designs, and were most likely placeholders.

Strangely, the border colors are exactly the same when the game is played on the Super Game Boy in the final version.

The Pokédex was in the middle of being redesigned, as the National one is enabled by default (in debug mode at least).

The layout of a Pokédex entry in this build looked a lot closer to the ones reminiscent of Generation I.

Even though the PokéGear isn't fully working, even via debug mode, the foundation for it was all laid down.

Nothing big here, other than the removal of the border and re-arrangement of options.

Other than the color changes, the background was touched up a bit in the final.

As usual, the Poké Balls present on the borders were removed in this build. While virtually nothing was changed, the blank slots for Pokémon were added in the final release.

The normally-unobtainable HM Moves in the demo actually have unique animations!

While Whirlpool and Waterfall (aka Bounce) are visible in the menu as field moves, they're unable to be used, instead giving a message that they're still under development.

In the demo, Hoppip is found in Gold while Marill is found in Silver, with both being found in the same locations and at the same levels. The trainers you can fight at the start of the game are also different depending on which version you are playing, said differences can be found here.

Several moves had their type changed between Generation I and II, but these changes had not been implemented yet in this prototype. Additionally, many new moves were in an unfinished state, and seem to default to Normal-type.

In the demo, most if not all Trainers are unfinished in one way or another, either using a different design from the final game, using the sprite of other Trainers as placeholders until their designs were completed and implemented, or ending up as a Trainer class which never made its way into the final game and thus is unique to this demo.

Among the unused designs is a unique sprite of Kurt based on his GS artwork, which is used as a placeholder sprite for most of the Elite Four members and two unused classes being listed as the "Trio" and "Geruge Member ♂" class (which for some reason has a duplicate listed as hex value 3E and uses the Twins sprite, while the original uses hex value 11 and uses a duplicate Kurt sprite).

It is also worth noting that many Trainer designs have elements reminiscent of ones they had in Generation I, along with the presence of some Trainer classes exclusive to Generation I (namely the Engineer and Guitarist classes).

For graphics used in this build which aren't present in the final game.

Overworld sprites of Poliwhirl, which were removed in the final game. They can be seen in-game, as a Poliwhirl is found walking around on the 5th floor of West City's Shop.

The player using the skateboard, a cut transportation mode.

Sprites of Giovanni, who can be found in the Radio Tower with his Rockets in this build of the game.

A different design for the player's mother. Notably has a more traditional Japanese look to her.

Silver's mother, or at the very least one of his family members.

A character posing as Professor Oak, a plot element which was scrapped at some point during development. Despite this, the Imposter Oak character still made several appearances in the official Pokémon Trading Card Game, as well as in the manga and anime.

Chilling in a small house near a cave located in Blue Forest. A generic girl runs the Ghost Gym nearby.

A different design for Falkner, with him wearing a headband.

In the prototype, Bugsy is a tall, well-dressed man. In the final game, he is a young kid with a different, simpler outfit.

An early design of Morty/Enoki.

A radically different sprite of Jasmine, which matches the more delicate design she has in the prototype.

A generic girl, whose design was possibly changed because she looks too similar to the Rival.

An alternate design for the nurse. Used inside the time capsule Pokémon Center.

Found in the traditional tower with the monks. Resembles the Medium Trainer class.

Appears to be a hole in the ground. Passable; when stepped on, the player walks left one tile. Found on the route west of High-Tech, and in Blue Forest. These holes aren't used in the final versions, but the top-right half of the graphic remains in the tilesets "Johto overworld", "cave", and "Ilex Forest" as two separate tiles. Unused in the overworld for whatever reason, but used in caves as the inner corner of two mountain tiles.

Graphics which are completely unused in the demo and, as expected, aren't present in the final game.

These graphics are loaded in the first part of the intro, but it doesn't appear at all. This was meant go along with the segment where Lapras is swimming on the ocean.

The back sprite that's used for the Gen I Pokémon-catching tutorial was also included in the prototype but unused.

A very tiny Snorlax. Reused sprite from Red and Blue.

A surfing sprite which resembles the ones in Red and Blue, aside from additional water ripples around the Pokémon. Despite this sprite existing in the data, a Lapras is used for Surfing in this prototype, just like how it is in the final game.

Resembles a stereotypical Japanese high school delinquent, complete with pompadour and school uniform. Might be linked to the unused Hooligan Trainer class.

The in-battle sprite for the Biker Trainer class found in the ROM looks nothing like this overworld sprite.

Three-fourths of the S.S. Anne graphics are located at 0x4E900. This tileset was possibly planned for a loading dock similar to the S.S. Anne from Gen I that was meant to ferry you to High Tech and Font. There are some slight changes (aside from the removal of some tiles like the truck and flag), such as an altered stone block.

Each version of the ROM contains corrupted data to pad out unused bytes in each bank, some of which being leftover data from Generation I.

From 0xC3E40 (these graphics are corrupted beyond recognition in the Silver demo):

What can be made out here seem to be the sprites of one of the male Silph Co. workers. If there were any other sprites from other NPCs here, however, they've been corrupted beyond recognition.