This page details one or more prototype versions of Portal Runner (PlayStation 2).

The PlayStation 2 Demo Disc 2.3, which is dated a couple of months before Portal Runner's release, includes a demo of Portal Runner, which is a one-level demo set on the Chessboard level. Compared to the final release, this level is relatively complete, with the only differences in the level design being the lack of a lion platform and therefore the lack of a vista point. This version of the level also contains 128 gems to collect, which is different than the final version's 100 gems. There are also several assets in the game which have been changed between the time this build was created to the final release. 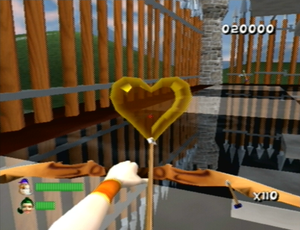 The health pickups in this demo build take the shape of gem hearts rather than generic hearts to fit more in line with the gem collectables present in Portal Runner. 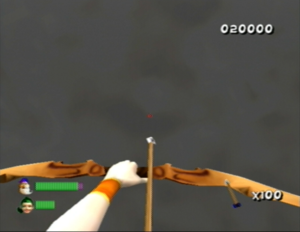 The bow in this build is completely different to that of the one used in the final game, featuring a more carved, whittled design compared to the final release. The crosshair in Hot-Shot mode also takes the form of a small circle rather than a cross. 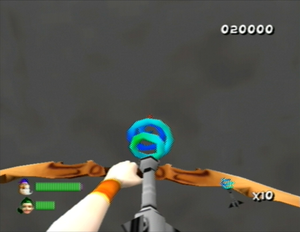 The piercing arrows have a completely different model, featuring a more normal arrow shape with a spiral arrowhead. This different model is also complimented with a different HUD icon. 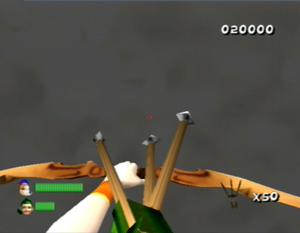 The trident arrows sit on the bow differently while aiming in Hot-Side mode, being stacked slightly on top of each other in an irregular triangle rather than the flat, evenly spread out trident arrows in the final. 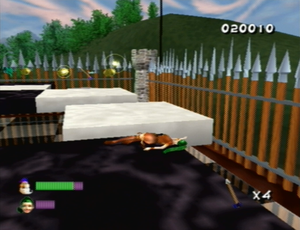 When dying in the release build of Portal Runner, Vikki disappears into dust very shortly before the screen fades to black. This build showcases an early death animation which involves Vikki collapsing to the floor and laying still before the black fade-out.