From The Cutting Room Floor
(Redirected from Proto:Quest for Glory II: Trial by Fire)
Jump to navigation Jump to search

This page details one or more prototype versions of Quest for Glory II: Trial by Fire (1990).

A rolling demo was released prior to the final game and it has quite a few differences as a result. 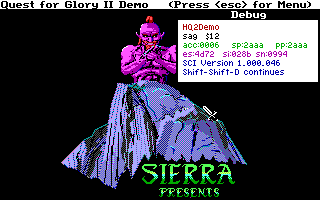 At any point during the demo, hold down both Shift keys and press the - key on the numpad. To exit this mode, press Shift and D. Doing this in the final version crashes the game, as the code for it has been completely removed.

The about text is much shorter than the final game, since many people are not credited and there is even a gag credit. It also contains two additional strings not in the final game.