This is a sub-page of Proto:Resident Evil 2 (PlayStation).

The Trial Edition of Biohazard 2 is a pre-release demo that is included in the Japanese version of Resident Evil: Director's Cut. Notably, the disc also contains a demo of Rockman Neo, which was later released as Rockman DASH in Japan.

A NTSC-U version and a PAL version which are very close to this one also exist, although they have some differences.

The colour scheme and some detailing differ.

The colour scheme and some detailing differ.

Only the small version differs.

A comparison between the demo version, the 10/31/97 prototype and the final.

A design ressembling that of the rocket launcher in the first game.

Early versions of the four suit-themed Precinct Keys. The small version of the (P) Precinct Key uses the same design as the dormitory key from the first game as placeholder.

The (P) Precinct Key was repurposed into the [Unknown Name] Key in the October 31, 1997 prototype, in which it opens the shutter leading to the elevator platform at the end of the A scenario. For this purpose, the [Unknown Name] Key was replaced by the MO Disk in the final version. Still in the final version, the key itself was repurposed again into the Platform Key, used at the end of the B scenario.

The (S) Precinct Key corresponds to the Heart Key in this version. It was repurposed into the special Locker Key in the final. The alternate costumes and the inside of the locker they are found in do not exist yet.

The (L) Precinct Key was repurposed into a Locker Key in the October 31, 1997 prototype, used for the locker in the police station basement storeroom and not to be mixed up with the Locker Key from the final version which opens a different locker as seen above. This key is unused in the final version of the game, it is not present in the data of the game. However, it made its way, as-is, to Resident Evil 3: Nemesis in which it was repurposed, again, into the Main Gate Key.

Early versions of the four chess-themed Plugs, as seen in Room 10B. Note that there only seems to be 3 plugs versus 4 in the final, presumably combining Bolt Plug and Bolt Handle together results in Lock Bolt C, although attempting to do so in-game does not work.

Items Not Present In Final

Possibly early versions of the Vaccine?

Chemical A and B, which are in the final unused, also have the same mechanic as they do in that version. They can be combined with Grenade Rounds which results in Flame Rounds and Acid Rounds respectively. However, unlike in the final where the number of grenades given as a result of the combination can vary from 1 to 6, in this version the result of the combination always gives 250 grenades.

It can be used to cure poison.

Unusable in the trial, though a 3D model for it exists. It is usable, though unfinished, in the October 31, 1997 prototype as well as in the final version, though these two inventory images did not survive in the final version in which they were replaced by the Colt S.A.A. 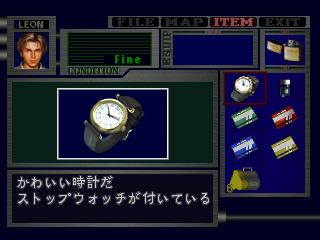 Possibly meant to be a personal item for Claire. 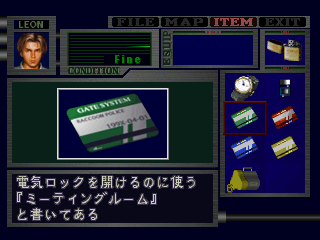 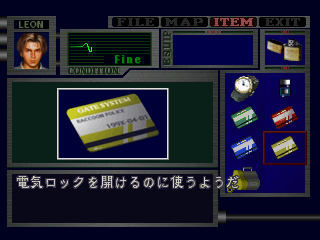 Note that both the Red Keycard and Blue Keycard which made it to final are also in this version.

Small versions of the above, when they exist.

The small versions of all three types of grenade rounds use the graphics from their counterpart in the first game as placeholder.

Although Claire is present (but unused) in the trial, this version contains remains of Elza Walker. 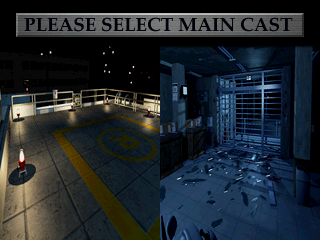 The background image which goes with the above. It is the character select screen, leftover from Resident Evil 1.5. 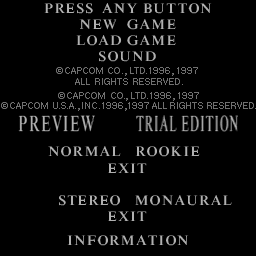 The "Information" text is unused in the US Preview. 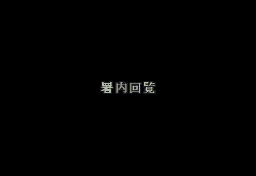 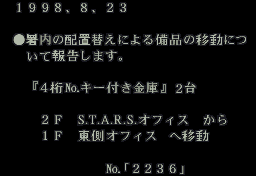 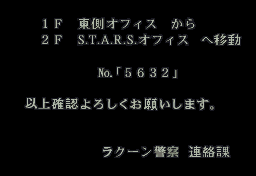 A file which can not be picked-up by the player and which does not have a version translated in English. It seems to give the code 2236, used for the small safe in the police station 1F office in the final, as well as a different code, 5632, which is apparently meant for the weapons locker in the S.T.A.R.S. office. This locker can not be opened in this version, although background data for it exists, and in the final version it is not locked. 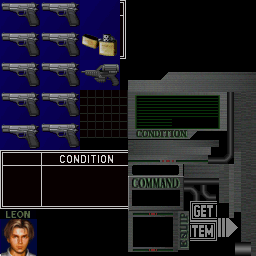 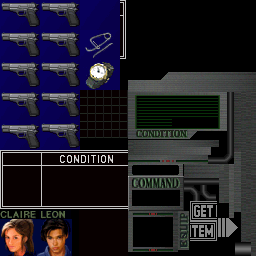 Two versions of the status screen exist: the mugshot in the first one is used, but not the ones in the second. All the mugshots differ from final. 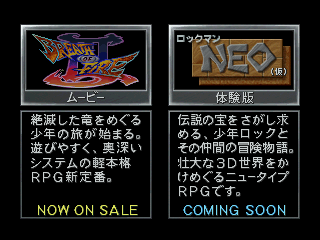 An advertisement for Breath Of Fire III and Rockman Neo available through the main menu's "information" page. The first one leads to a video of the game, the second one to a playable demo.

Note that the above is true in all three demo versions (Japanese Trial Edition, NTSC-U and PAL Previews). However, things are different in the October 31, 1997 prototype.

Except from the two following rooms, all the backgrounds are identical to that of the August 27, 1997 US Preview.

The door which leads to another corridor, which can not be opened in any known version due to being blocked on the other side, was moved. Some detailing on the wall was changed.

Door frames were improved to make the doors visible. On the last screen, the compartment for the Unicorn Medal doesn't exist yet in the Japanese version, while in the USA version it is an early version with a placeholder medal.