From The Cutting Room Floor
< Proto:Sly 3: Honor Among Thieves
Jump to navigation Jump to search

This is a sub-page of Proto:Sly 3: Honor Among Thieves.

A preview prototype of Sly 3: Honor Among Thieves, dated August 2, 2005, was released in 2018. It predates the final NTSC build by 26 days, and contains many differences to the final game as well as debug functionality. 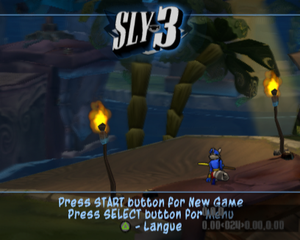 Title screen for the August prototype, including the earlier Sly 3 logo.
Retrieved from "https://tcrf.net/index.php?title=Proto:Sly_3:_Honor_Among_Thieves/Aug_2_2005_Prototype&oldid=1286319"
Categories:
Cleanup > To do
Subpages