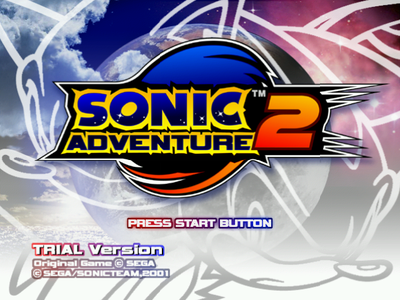 This is a sub-page of Proto:Sonic Adventure 2 (Dreamcast).

Sonic Adventure 2: Trial Version was given to certain stores in Japan. The build date of this demo is May 3, 2001, less than a month before the release of the final. It includes the same levels as SA2:Preview, but the only playable characters are Sonic and Shadow this time.

The title screen has text in the bottom-left corner indicating that it is a trial, along with slightly different text below it.

The logo displayed on the VMU is different to the one used in the final.

On track 1 of Trial Version's disc is a wallpaper unique to this version of the game:

Along with the following text files: