This page details one or more prototype versions of Sonic R (Sega Saturn). 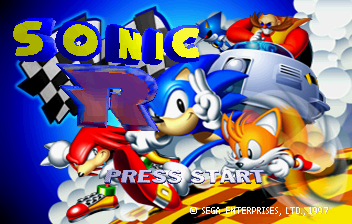 Sonic R (Preview) is an early version of Sonic R that was released by drx in 2008. It's dated 10th September 1997, two months before the release date of the final game.

Only three courses are in this version, lacking Regal Ruin and Radiant Emerald. This version is also missing a lot of features present in the final game, such as the hidden characters and Time Attack modes.

The Traveller's Tales logo is much simpler than the one used in the final game - it's 2D on a plain white background, rather than 3D over a body of water.

Only three courses can be selected - "Island", "City" and "Factory". These were renamed in the final game to Resort Island, Radical City and Reactive Factory respectively.

The loading screen was changed from a disc saying “LOADING” to a Sonic head in the final.

The fanfares for starting and ending a race are slower:

There are more hidden coins to fit with the increased coin count. The coins used in the final game are in the same positions, but in this version there's four more:

3 coins are in the same positions as those in the final game (Top of construction site, bottom of construction site, behind last ring door), 2 are in different spots and 3 extras are present. One of the coins is missing, so it's impossible to get all 9 coins in this course. Two of the course's item emblems are in different places to the final game:

The location of two item emblems in this course are different:

There are only 4 coins in this course. Two of them match up to locations of coins in the final game (Near race line, pool area), but the other two are in different spots.