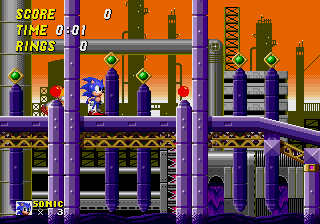 Oil Ocean has been worked on since the Simon Wai prototype, though there are a few leftovers.

Like the previous prototypes, the sun uses a basic static graphic; it became animated starting with Beta 5.

Submarine Eggman II's lasers and flames use Sonic's palette in Beta 4, which would be fine if Super Sonic wasn't programmed in. From Beta 5 on, the game loads a unique cyan palette during the boss fight.