From The Cutting Room Floor
< Proto:Sonic the Hedgehog 2 (Genesis)‎ | Beta 4 to Beta 8
Jump to navigation Jump to search
This page contains changes which are not marked for translation.
Other languages:
English • ‎polski

This is a sub-page of Proto:Sonic the Hedgehog 2 (Genesis)/Beta 4 to Beta 8.

Starting in Beta 6, he flies to the right at six pixels per frame.

In Beta 4, it's possible for the first Coconuts to hit the player before they get their first rings. They moved that Coconuts two trees over to fix that.

Starting in Beta 5, there's an extra ring before the first small quarter-pipe.

Those three rings embedded in the ground, originally used in the Nick Arcade layout, are present all the way through Beta 8. They were finally removed in the first retail build.

The hidden floating island on the upper path is empty in Beta 4. They added a few rings and a checkpoint in Beta 5.

One of the rings in this cluster on the upper path was deleted to make up for the one that was added previously. Conservation of rings and all that.

The Buzzer was moved from the lower path to the upper path in Beta 5.

In the upper path, the bottom six rings in this ring pyramid were deleted, and a four ring diamond was added above the yellow spring.

In Beta 4 and Beta 5, the signpost at the end is a couple pixels higher than it should be. It's properly planted in the ground starting in Beta 6.

In Beta 4, if the player spawns back at this checkpoint, the Buzzer on the right will immediately fire a shot at them, killing them if they're caught unawares. In Beta 5 and later builds, the Buzzer is further away from the checkpoint. 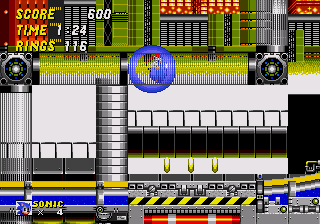 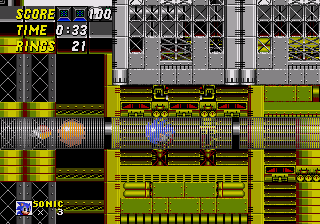 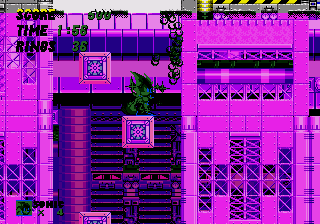 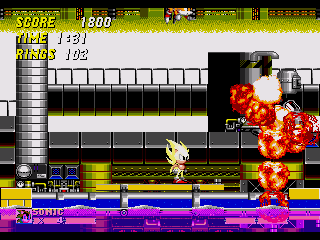 The girders in the background are silver in the Simon Wai prototype and Beta 4. In Beta 5, they were changed to use the same gold-green palette as the other tiles.

This hidden bonus cache on the bottom path has existed since the Simon Wai prototype. In both that prototype and Beta 4, that room is empty; In Beta 5 to Beta 8, there are two extra life monitors and a super ring monitor there. The final game changes the two bonus life monitors to an invincibility monitor and another super ring monitor to patch a potential infinite life loop.

The extra life monitor in this cubby in the lower path was changed to a super ring monitor.

The final game adds another checkpoint to this area on the middle path.

Starting in Beta 7, another checkpoint was added to the left of the first checkpoint on the upper path. Note that in order to actually take advantage of this extra checkpoint, you'd have to jump over the one on the right and hit the one on the left first.

The final checkpoint in the act changed its position frequently: In Beta 4, it's further along in the act; In Beta 5-8, it's placed to the left of the final booster in the level; And in the retail release, it was moved further to the right. 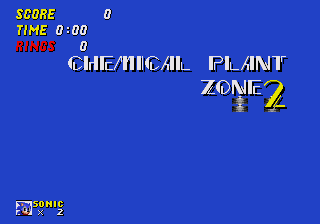 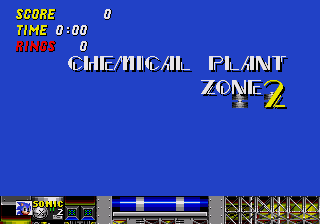 If the player respawns at the checkpoint in Betas 5-8, they're able to see the speed booster sprite adjusting its position.

The extra life monitor on the upper path was changed to an invincibility monitor. You're going to see this a lot, by the way. 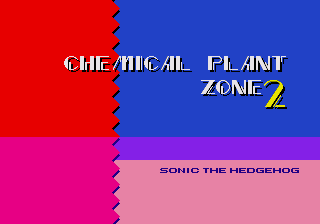 The reason why the checkpoint was removed? The water palette bleeds into the title card.

However, there's another problem that's existed since the Simon Wai prototype: If the player is going too fast, they'll overshoot the floating platform and land in the pit. To quickly patch this, they added a rising block line on the right side of the pit.

The small floating platform with the red spring is barren before Beta 8. They added an invincibility monitor there later.

This extra life monitor was changed earlier than most of the other ones. It is easy to get taking either path, so this was a good change.

The rings in the upper tunnel were removed in the final version, due to a change in how that tunnel worked. 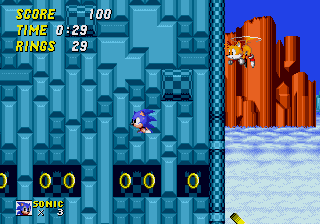 Up to Beta 7, the player is able to get into that tunnel through the side (which is intended) and from above (which is a bug). They fixed entering from the top in Beta 8, but that fix ended up making that tunnel inaccessible. To allow the player to get a perfect ring bonus, the tunnel was drained.

The shield monitor next to the first checkpoint was removed after Beta 4.

This tunnel was empty in the Simon Wai prototype, but they added a super ring monitor in there in Beta 4. There's no way to get into that tunnel, though - there's no collision changer object here. So, in Beta 7, the monitor was removed and the tunnel is once again empty.

A blue rock was added to the flat ground at the start of the rising ground section.

There's a Sol badnik right at the start of the act. It's very possible that the player wouldn't have obtained a single ring by the time they reach it, so they moved it to later in the act.

In Beta 4, the checkpoint isn't at the center of the loop. It was moved in Beta 5, but the super ring monitor stayed in the same place. Later, in Beta 6, they moved that monitor to the right.

The yellow spring was changed to a red spring for the first retail version, allowing the player to bypass the seesaw on the next ledge.

The first Sol badnik was moved to this area on the lower path starting in Beta 6.

The ring formation at the top is still at its Simon Wai position in Beta 4 and Beta 5. In Beta 6, they finally remembered to move it down to a more sensible location. The red spring was also buried in the ground.

The pit on the lower path just has a red spring, an extra life monitor, and a Rexon in Beta 4 and Beta 5. Two sinking and rising platforms were added in Beta 6 to make the pit easier to traverse. 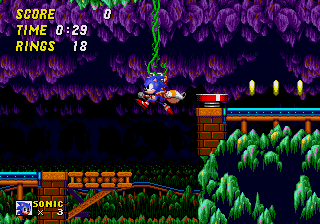 This was changed to fix a small visual glitch; If the player is pushing against the spikes when they grab the vine, they'll start walking in place as the vine rises.

However, the amount of objects in this setup can cause the game to start lagging, so the developers eliminated the middle platform, moved the remaining two platforms and rings around, and added a collapsing ledge on the right to fill the new gap.

The spikes in the pit were raised slightly to match the height of the moving platform. The super ring monitor was added to the left of the pit.

The infamous inescapable spike pit originally had a red spring, super ring monitor (later moved to earlier in the stage), and a collapsing ledge in it. The player would still be stuck there if they pulled the bridge down and then jumped in the pit, but at least it's something.

The sun in Oil Ocean still uses the graphic from the Simon Wai build in Beta 4. Beta 5 is the first to use the animated sun.

Submarine Eggman II's lasers and flames use Sonic's palette in Beta 4, which would be fine if Super Sonic wasn't programmed in. From Beta 5 on, the game loads a unique cyan palette during the boss fight. 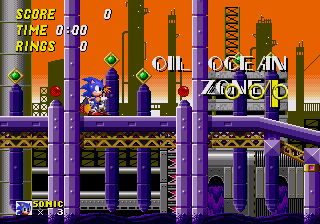 The first three rings in Act 1 were removed after Beta 4 because they ended up overlapping with the title card.

Spikes were added under two oil slides in the lower path to fix an oversight. The game tags certain 128x128 chunks to make Sonic & Tails slide if they're on the ground. 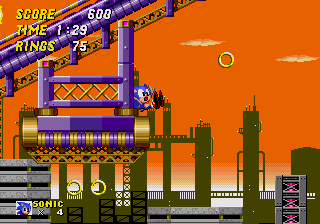 However, the chunks here have solid ground below the oil slide, so if they managed to reach one of those small ledges, they'll start sliding back and forth. 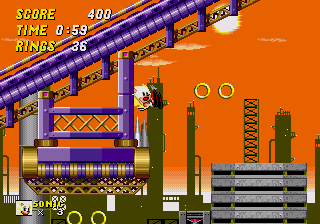 Spikes were put there to discourage this behavior, but if the player(s) get on top of the spikes, they'll start sliding again.

Spikes were put on the wall to the right of the pressure launcher to try to keep the player from jumping over it...but Super Sonic can jump high enough to clear it. 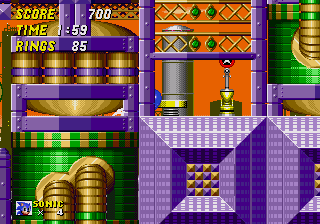 The yellow spring by this checkpoint in Beta 4 is a little further away from the ledge than it's supposed to be; If the player falls to the left of it, they can wind up stuck in the left wall.

The shield monitor was pushed further to the right to fix the aforementioned bug, then they threw in a super ring monitor for added value. 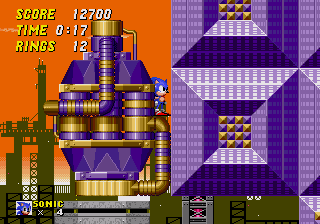 In Beta 4 and Beta 5, the player will either get stuck or get crushed if they managed to wedge themselves into the right side of the second purple machine. 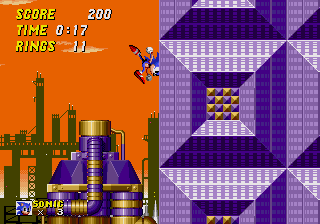 Spikes were added in Beta 6 to fix the "get stuck" part, and due to changes in collision, the player will get flung up in the air if they try to get in there.

Beta 7 adds spikes to the upper-right to keep the player from going over the wall.

They added spikes under the oil slide again, ma.

The super ring monitor to the left of the final checkpoint was removed. Guess it ended up next to that shield monitor. 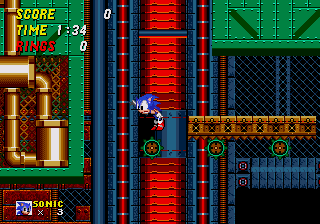 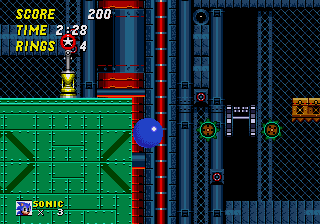 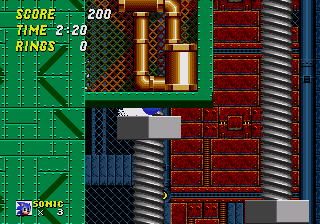 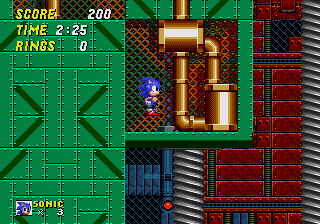 There's no invisible block above the elevator to crush Sonic, and the insides of that chunk are hollow, so the player is able to embed themselves in the ceiling. If they get all the way to the top by Spin Dashing, then press Left, they'll phase through the ceiling and be stuck until time runs out.

In Beta 5, and only in Beta 5, the signpost is missing from the end of the act.

An extra checkpoint was placed before the second transport tube on the upper path.

Horizontal spikes (the graphics aren't loaded so they appear as pressed switches) were placed to the right of the invincibility monitor. The player can't phase through the wall in Beta 4, so it's not clear why they were added. Better safe than sorry, one supposes.

An extra checkpoint to the right of these three gears. Check it out.

While the layout and object placement in this stage is identical between Betas and the final version, there were a few bugs that needed fixing: 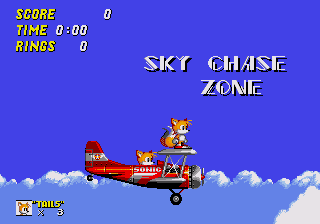 From Beta 4 to Beta 6 (the first version with the options menu), the pilot of the Tornado is always Tails. This also applies to Wing Fortress Zone. Fixed in Beta 7...

...but in that version, Sonic's sprite in the Tornado is different. It's supposed to look like wind is blowing through his spines but it doesn't quite work. It was updated in Beta 8. 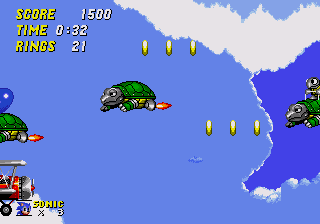 If the player Spin Dashes on top of the Turtloid platform, they'll stay put, unaffected by the autoscrolling. This was corrected in Beta 8. 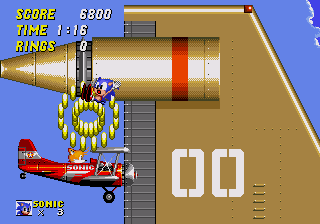 In the flyby past Wing Fortress zone, the propellers are able to damage the player. This was fixed in Beta 7. 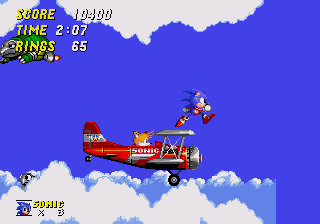 When the player reaches the end of the zone in Beta 4, the background keeps scrolling after the screen locks. Fixed in Beta 5. 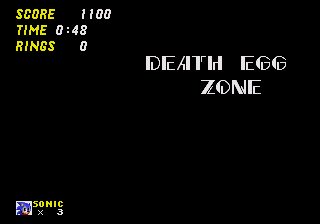 The Death Egg Robot was moved into the right-hand corner in the final version.

There are no layout or object placement differences. Only minor development on this zone occurred after the Nick Arcade prototype.

This zone is in the process of being dummied out: the stage tileset and collision table have been deleted from the ROM, and by Beta 5 it's exactly as it is in the final version. Beta 4 is a bit more intact, though: