From The Cutting Room Floor
< Proto:Sonic the Hedgehog 2 (Genesis)‎ | Nick Arcade Prototype
Jump to navigation Jump to search
This page contains changes which are not marked for translation.
Other languages:
English • ‎polski • ‎русский

This is a sub-page of Proto:Sonic the Hedgehog 2 (Genesis)/Nick Arcade Prototype. 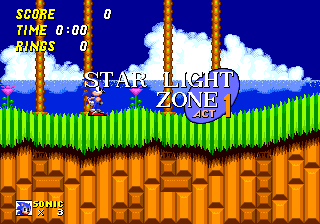 At this point in development, the game uses the Zone names and music from Sonic 1. The Sonic 1 title cards are present and intact, but are invisible because the commands to display them are preceded by a return command. Removing the return commands will show the title cards with the Sonic 2 palette. 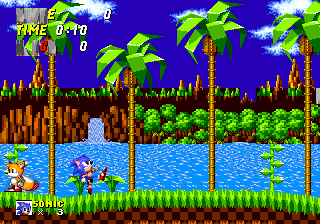 As you'd expect, it's Green Hill from Sonic 1...except now with broken collision and glitched/missing graphics. 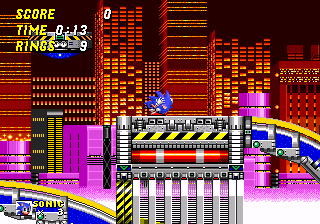 The only other Zone seen during the game's Nick Arcade appearances, the CPZ gameplay demo was visible in the background of several shots. Until the ROM was dumped, it was the only glimpse of its differences. 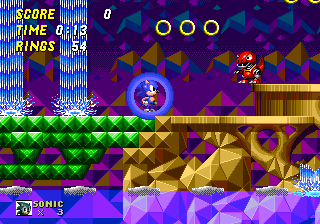 Perhaps the most interesting Zone that was cut. 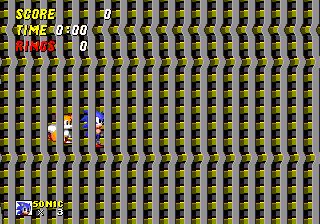 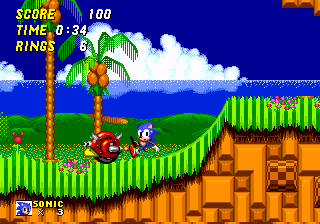 The most complete Zone in the prototype, and the only one playable without using the Level Select. On Nick Arcade, contestants played Act 1 and had to collect 25 rings in 30 seconds.

This Zone features a badnik that was removed from the final version: a red-shelled snail. This Motobug-like enemy slowly moves around on the ground. When it sees the player, it charges at them (as much as a snail can charge at something, anyway). This enemy was replaced by Coconuts in the final game. 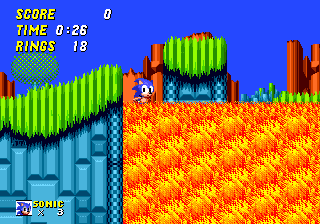 A preliminary version of Hill Top. Due to occupying the former Scrap Brain level slot, there's a bit of residual weirdness. Read on for more about that.

Act 1's layout is complete, but the lower screen bound has not yet been changed from Sonic 1's SBZ Act 1. As a result, the Act cannot be finished.

Act 2 cannot be completed with Sonic, because if the camera moves past X coordinate $1EAF the game tries to load pattern cue $1E, referencing data that is not a pattern load cue, causing the game to read garbage art data as a pointer and subsequently crash with a blue screen. As the event handler is specifically looking for Player 1's camera X position to trigger the event, however, Tails can complete the Act.

Removing the art load cue will allow Sonic to go further into the level. After the point that triggered the art cue is reached, the player can fall off the level to go to Act 3, a remnant from Scrap Brain Act 2 in Sonic 1. 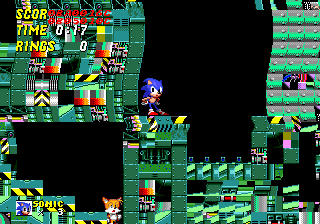 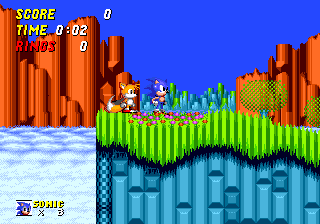 By using Action Replay code FFFE10:0600 you can access Zone ID 06, which was the ending scene in Sonic 1. The stage uses Final Zone's music, Green Hill's art and palette, and Chemical Plant's layout.

Unfortunately, it's also very much broken: The stage is mostly garbage data still left over in the ROM, some collision is present, and some pattern load cues must be modified or else the game will crash with a blue screen when starting the level. Green Hill's chunk compression and level header also must be used here to prevent a crash. Trying to access Acts 2 or 3 of this Zone will result in an Illegal Instruction error.

The game crashes while loading it due to bad pointers and missing art, but most of the code is based on the Sonic 1 Special Stage.

It is possible to modify the code to where it won't crash, and doing so reveals that the graphics have been deleted from the ROM. The color palettes still work, though, and the coding for all objects is still present.

Retrieved from "https://tcrf.net/index.php?title=Proto:Sonic_the_Hedgehog_2_(Genesis)/Nick_Arcade_Prototype/Zones&oldid=1256472"
Categories:
Cleanup > To do
Subpages