From The Cutting Room Floor
< Proto:Star Fox
Jump to navigation Jump to search

This is a sub-page of Proto:Star Fox. 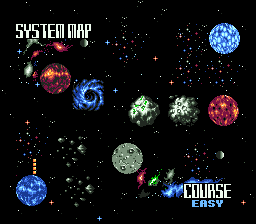 Star Glider (not to be confused with Argonaut's 1986 game of the same name) is a prototype of Star Fox that was found pre-built in a tape backup present in the July 24, 2020 Nintendo leak. At this point, the game is in an extremely early state - the Star Fox team is absent, and the level map design is drastically different, with more cosmic details.

Note that this build lacks the ROM registration data section of the header, and therefore will not work in emulators. In order to run this prototype in an emulator, you'll need to add said data to the ROM. 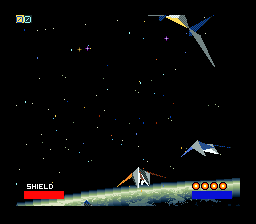 The names for these stages are based on the final game. They are not named in this prototype. 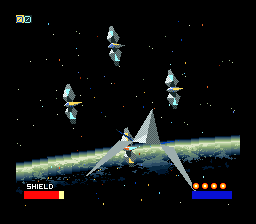 This stage is fairly complete, with waves of enemies, many of which made it into the final. A few of the enemy types resemble bizarre insects. The view of Corneria is much darker. It ends with a much faster and more resilient version of the Rock Crusher boss from the final game. 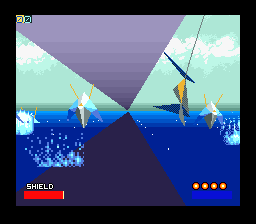 This stage is an unfinished version of the Titania boss sequence from the final game.

The player is flying below an unsuspended bridge over a large body of water and various enemies leap from below to attack them. As Professor Hanger himself is missing, the stage is simply a short loop of aquatic enemies that goes on forever. 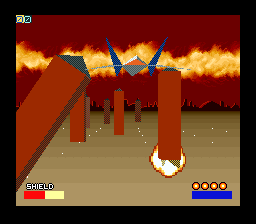 Venom in this build has more of an orange tone with a more industrial background and strangely cheery music. This stage features scrapped bird-like enemies that, when shot, burst into flame and fall to the ground, where the wreckage sits and smokes until the player passes it. These enemies, while technically impressive, were most likely removed to keep the technical demands of the game in check.

The boss of this stage starts with a huge invincible monolith-like structure moving overhead which, after spewing waves of enemies and rocks at the player, moves on to reveal the true boss - the Spinning Core from the final game's Macbeth stage. 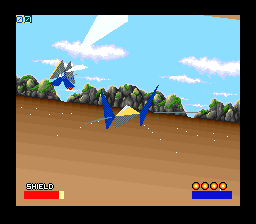 Identical to Venom, however the background is replaced with a new, more appropriate one. 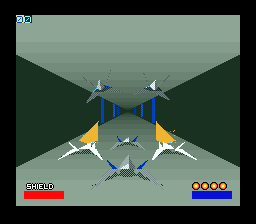 This stage begins with a cutscene: the player's Arwing is grounded in formation with three others in a tunnel. Two enemies fly down the tunnel towards the player and shoot two of the other ships, which blow up. The player and the one remaining Arwing take off and begin to fly down the tunnel, where two more Arwings join the formation. The three other Arwings fly off into the distance and here the player takes control.

As the Arwings in this cutscene begin on the floor, it is possible that this is an early intro cutscene for the game.

The stage begins as a continuation of the cutscene, where the player flies down the tunnel. For a few seconds, the player has control while the other Arwings are on screen, and it is actually possible here to shoot them down. They take only one hit before they blow up.

The player must destroy a few enemies and open a door, after which the stage opens out into Fortuna. After the intro sequence, this stage is identical to the last which in turn has the same layout as the Venom stages. 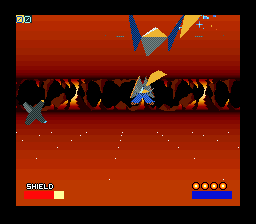 This hollow planet has the same stage layout as Venom again, but with a Macbeth-suitable background that features some nicely-animated parallax rock formations. The Spinning Core boss makes a lot more sense in this context. 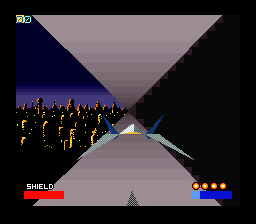 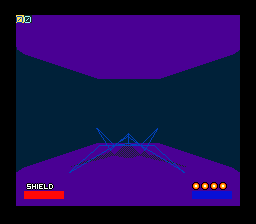 Pressing Select during gameplay cycles through most of the stage types in the game. In order, they are:

The tunnel and highway backgrounds all have working wall collision. Strangely, the Macbeth background is absent. 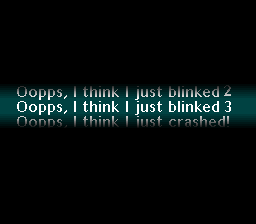 There is a crash handler that can display one of the following messages, with a short scroll animation at the start. It can appear when you apply custom cheats when loading a level.

In the released game there isn't a crash handler, soft crashes usually redirect the player to the "controls" screen (and the progress is reset).

Retrieved from "https://tcrf.net/index.php?title=Proto:Star_Fox/1992_Star_Glider_Proto&oldid=1239791"
Categories:
Cleanup > To do
Cleanup > Works In Progress
Subpages