In this build an item can be used by pausing the game, moving the flashing selector using Left or Right, then pressing either A, B, X or Y to use it and unpause the game. In the final version, only A can be pressed to use an item, and B can be used to exit the pause menu.

The player can hold up to 27 items at once, rather than 22 in the final game.

Not actually an item, but transforms Baby Mario into Superstar Mario for a time. Can be used multiple times per level, and works even if the player has no items left.

Adds one second (10 tenths of a second) to the timer.

Making the time reach a value of more than 30 seconds doesn't give additional points at the end, but gives Yoshi more time to catch Baby Mario if he separates from him. 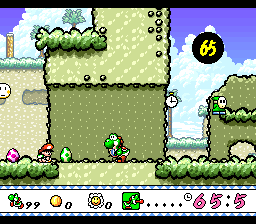 Adds five seconds (50 tenths of a second) to the timer.

Transforms the coin outlines into true coins and makes the ! Blocks solid in the whole level. Its effect lasts until the level is exited and, as a result, can be used only once per level.

Kamek's Magical Shapes in a Bubble

Nothing seems to happen when using this item. Hovever, RAM addresses 0x00D44 - 0x00D45 (or 0x00D4B - 0x00D4C in the later prototype) are used in a level to store a decrementing counter (typical for a bonus that expires after a while) that, when set to a non-zero value (e.g. by using the Game Genie code EED0-0F07 for the ys_romX_0 prototype and EED0-07D7 for the ys_rom_0_D one), makes Baby Mario transform into the baby wizard and start throwing these shapes to nearby enemies or objects: 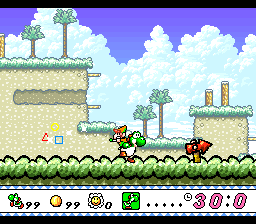 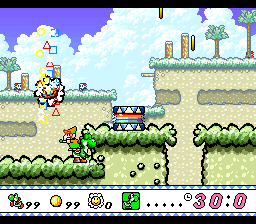 Only some types of enemies are affected as they transform into a melon (that occasionally can be thrown upwards) or an egg and ? Clouds interact with them as well. If an object is not affected, they'll remain floating around it.

Unlike the other items, it cannot be found by default in the item inventory when playing from File 1, but it can be obtained in the first Bonus Challenge.