This sub-page details all the levels of World 2.

The Mushroom transformation appears mid-way through the level. The graphic used for it inside the bubble is corrupted (displaying instead as a green Spooky chunk), and when Yoshi pops the bubble and transforms, it's very unstable: the game could hang, or Yoshi could fall through the ground.

If the transformation doesn't break the game, the only thing Yoshi can do is move left/right. He cannot jump or be hit by enemies, though he can use his cap to slow his descent by holding B (only before he touches the ground in Mushroom form) and get eaten by the nearby Piranha Plant.

The train tracks on the wall and the Warp Block at the top of the wall indicate this transformation should have given Yoshi the ability to get up to the block somehow (i.e. by using the Train transformation), but the Mushroom transformation does not enable Yoshi to reach the block. Fixed in ys_rom_0_D. 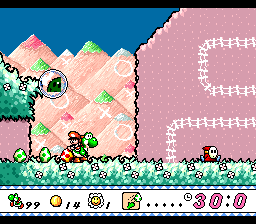 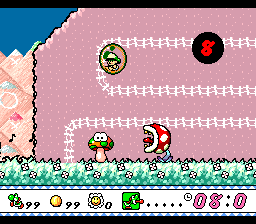 An earlier version of the final's 2-2: The Baseball Boys.

By using free-movement mode, we can progress to a pipe, where the layout changes significantly from the final. This pipe leads to a sewer maze with an invalid background. There are multiple exits out of the sewer, with three of them leading to a confined area outside of the sewer. This confined area contains an Egg Block and a ? Cloud with a Flower in it. Taking either side exit to this confined area accidentally places Yoshi out of bounds, but he gets forced out. The fourth exit leads to a death plane, and the fifth leads to the end of the level.

The end of the level has the player bounce on Flutters like stepping stones to the Goal, an idea which would be used in the final's 4-1. 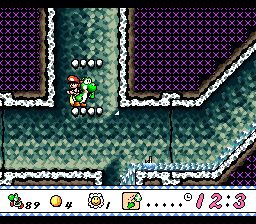 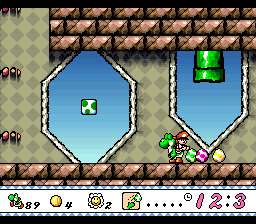 The gimmick of this level is falling stones, including a falling block room much like the one in World 2-1 from the final release.

The falling block floors throughout the level have weird collision that makes it hard for the player to jump while on them. Additionally, they only kinda support the Chomp Rock that appears later in the level - the Chomp Rock simply falls through them if Yoshi is pushing it, but will stay on the rock platforms if rolling idle.

Aside from that, the level is fairly plain. The player mostly fights enemies while trying to avoid rock platforms that fall out from underneath them. 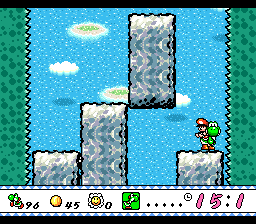 This level takes place in a castle with lava. 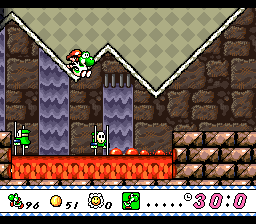 When touching the lava and losing a life, in this level the black fade-out happens twice and three lives are subtracted from the total, for some reason.

The level contains Shy Guys (on stilts inside the lava, walking on the ground, and moving the spiked balls and the related shaft), Bandits (in two colors), Fangs (bats), and Blarggs. 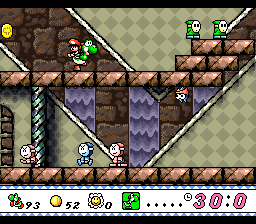 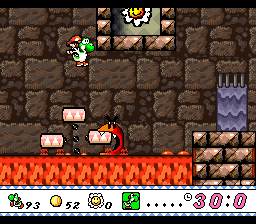 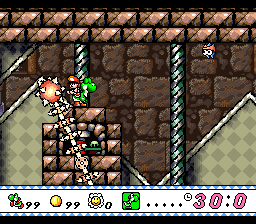 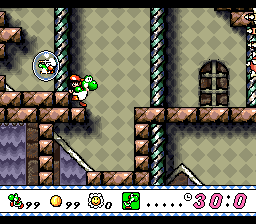 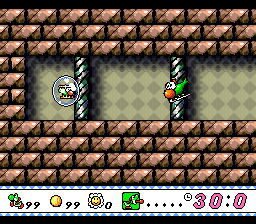 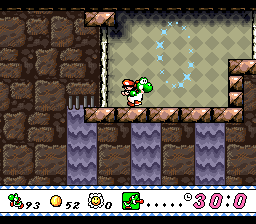 Reaching the door at the end of this level leads Yoshi to the top-left corner of a new map that is presumably the rest of the level. Under normal circumstances, Yoshi is not able to reach any land and cannot flutter at all, leading him to fall to his death and making the level unwinnable. However, by using the free movement mode and hitting the loading trigger, one will find that the level that gets loaded is World 1-1.

This is likely due to the door not having a valid warp defined by the developers, so it defaults to the upper-left corner of World 1-1. A similar glitch exists in the final version. 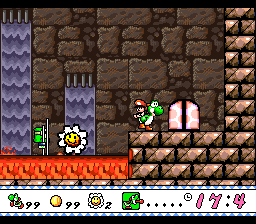 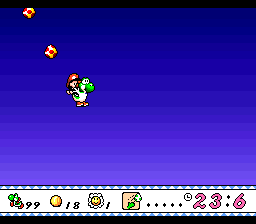 The green and gold Bullet Bills open and close their mouths while flying through the air. 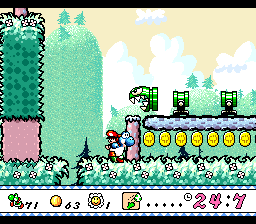 This level is basically World 2-6 in the final release. There are small differences in enemies, object placement, backgrounds, etc., but the overall format of the level is the same.

The Fuzzies in this level have their functionality programmed in, so touching a Fuzzy does make you dizzy, complete with the palette shifting and level distortion effect. However, the music doesn't get distorted yet, and the level distortion causes some collision issues. 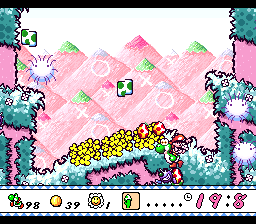 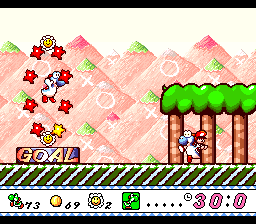 Oddly, the world map shows a Yoshi being in a cave for this level, but none of the level takes place in a cave.

The weird thing about this maze is that some of the tunnels are blocked by stray wall tiles, including the tunnel to the boss, so the level is unbeatable without free movement. One of the rooms in the maze has a Raven spawned on the outer wall by mistake. 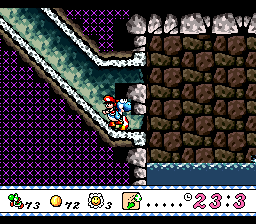 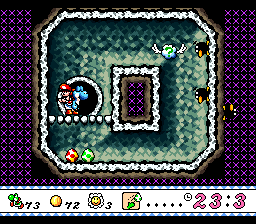 Once the boss room is entered, things play out much like in the final version, albeit with more difficulty: piranha vines come up out of the water on the way to the boss room, and spores come down from the ceiling when Naval Piranha hits either wall. 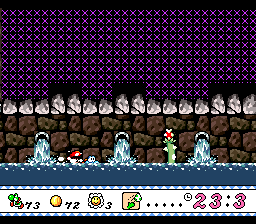