From The Cutting Room Floor
< Proto:Tempo
Jump to navigation Jump to search

This is a sub-page of Proto:Tempo. 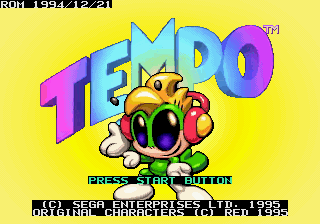 A debug mode that was disabled in the final can be activated by pressing different button combinations: 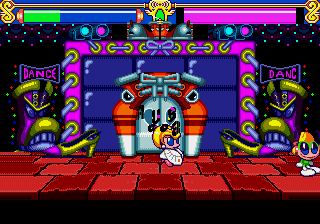 Tempo's 1up graphics were redrawn in the final.

A date is given on the top-left corner of the screen, which is supposed to be the date the prototype was built, but it is inconsistent with the other dates in the ROM. The special background behind the copyright has not been inserted. Also, the "Press Start Button" text uses a standard font in the prototype.

The buildings do not move in this screen, and transparency is applied incorrectly. The background was also re-drawn and re-colored.

The palette of the passwords screen(s) is/are screwed up, no matter from where they are viewed. There's a different arrangement of which sounds are played for most actions.

Katy is present, doing her idle animation that was seen in a prototype that was shown in a promotional video, on this screen, but you can't see her without moving down. A little round selection debug box can be seen in the top-left corner. The sprites move way too fast in this prototype compared to the final version. This screen is lacking the cameramen and the crowd, although the crowd is present in the prototype's data (their graphics can be viewed in the VRAM, but they (normally) aren't visible). The sides of the background were slightly recolored and shifted upward. The teleporting stands are also absent. Finally, the camera is moved slightly downward.

Aside from having a "pts." added and slight recoloring to the background when the double score power-up is used, it is identical to the final version. 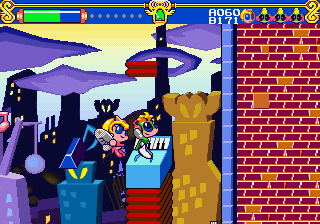 Some objects tend to glitch up their graphics.

A row of keys at the beginning of the level were removed from the final. Also, as with the sound test screen, the background was re-drawn and re-colored.

Different object placement, along with a solidity issue.

Glasses were later added to Dȧ Boot, matching the artwork in the Japanese manual.

The entrance has extra platforms on the top to prevent the player from attempting to walk on the polar bear's muzzle. The platforms were re-done to make the entrance look less conspicuous. The "IN" sign was also re-drawn.

The second part of the level has glitched tiles all around the level and no objects, sans spikes. An invisible ceiling was added to this scene in the final.

There is a note here instead of three enemies.

In the proto you have three of these boosters going up and on the top, two going down. In the final, there is only one going up.

This teleporter was moved up in the final, forcing you to go through the electric hazards.

These wires are colored differently from the final, and neither they nor the computers in the background change colors like they do in the final.

The platforms in this segment do not work, and the background displays are colored white instead of green.

These "electric flies" are imprisoned in the final, giving you more time to move around before they attack you.

In the proto, you start on top of this enemy.

The TV was removed in the final.

This act reuses the background from the last act instead of the Downtown Act 2 background. Also, when you summon Katy the note in the floor doesn't disappear. The direction sign on the top is moved up a bit in the final.

Baffo dâ Clown's stage doesn't have working monitors. The background was slightly retouched in the final.

The frog platforms got revamped in the final.

Ditto. If you break the honeycombs in the proto, you get one bee enemy and one note. The final gives you nothing.

This section was made easier to reach in the final.

You can actually fall here and not die. You're able to move around a bit under the stage until you die for some reason. 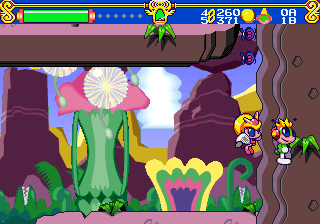 The Bee-Bees stage uses the Baffo dâ Clown stage background as a placeholder. This boss only takes one hit to beat.

This act uses a background from the Final Performance instead of its own. The floor was changed a bit.

Instead of not facing a boss at all, you face Dȧ Boot with an empty background. This is likely a placeholder for a boss that was not finished.

The door graphics are different, and this solidity issue was fixed in the final.

The room layouts are finished, but there are no objects in them. The doors do not open, as well, meaning the player has to keep going right. Tempo can get past the room with water, but it is difficult to do without debug mode on. If Tempo does make it past the water, the player will be sent to a series of rooms to pan out the level, which are likely placeholders, until the player eventually makes it to the final boss. The final boss merely stands in the middle of the room, and doesn't do anything other than deflect direct kicks. Killing the boss sends the player to a screen saying "The End" rather than the ending sequence.

A glitch causes the level music to keep on playing after the "The End" screen. To end the music, go to the Options menu and return to the title screen.

Retrieved from "https://tcrf.net/index.php?title=Proto:Tempo/1229_Prototype&oldid=715274"
Categories:
Cleanup > To do
Subpages