This page details one or more prototype versions of The Curse of Monkey Island. 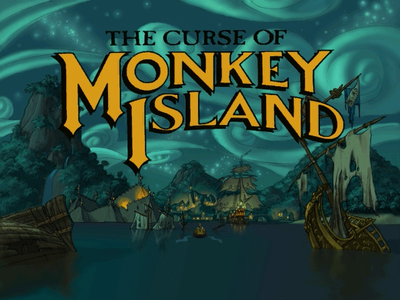 Dialogue text placement was modified. The font itself was changed in order to be more easily read.

The verb coin subtitles list the object name right below the verb coin. In the final version, it lists the object and the action at the bottom of the screen. The object font color was also changed.

An unused bullseye cursor can be found inside the files of the demo and final version of the game.

The dialogue arrows were changed from brown to red.

The same change was applied to the page arrows.

The treasure chest was redesigned and refined. The helium balloons' graphics have also been remade. Item highlights were changed from yellow to red.

This image which appears when using the debugger to go to room 1 is present in the demo as well as in the final game.

An unused, badly drawn version of the verb coin hand.

Unused lines about 'Piracy: The LeChuck Way.' Originally, chapter 3 was going to cover this, while 'Chapter 4' would have covered 'Mermaids or Manatees? Does it really matter?'

Example: After asking about his fake beard in the demo, you'll get the "Ya' scurvy sea dog!" option which cannot be accessed in the final game.

An unused line where Wally clarifies where he got his hand torn off.

A cut line about Wally's gun.

This unused exchange would have occurred after Guybrush recognizes Wally.

Cut Wally lines endorsing the motivational seminars. This would have occurred after Wally says "But thanks to LeChuck's seminars, motivational lectures, and audio books-on-parrot, I've become a vicious corsair!"

Unused Wally threat that would have happened after Guybrush dared him to shoot.

A sad Wally thanks Guybrush.

There's placeholder dialogue where Guybrush narrates what happens when he cuts the porthole inside the treasure hold.

This line is heard in-game with a pitch effect after using the helium balloons. Here's what it actually sounds like:

The demo has different audio for certain events.

Guybrush has a different reaction if you try to use cutlass with Wally.

If you try to give gaff to Wally:

When Wally is on the floor crying, there is an animation of tears flying from his eyes. This is not present in the final game.