This page details one or more prototype versions of The Elder Scrolls Travels: Oblivion.

There are five known builds which have been leaked, with dates between June 9, 2006 and April 27, 2007. This page documents the first four.

Unlike the final version which has animations, earlier builds have static logos for Bethesda Softworks and Climax.

This build's icon differs from later builds, and the game title is "OBLIVION" whereas all other builds are simply titled "Demo". The volume metadata credits the publication and preparation of this build to "DAVE". 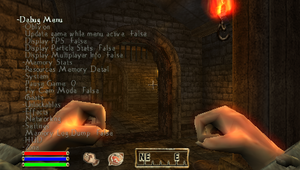 An extensive debug menu accessed by pushing Up on the D-Pad. It can be navigated by pressing Up and Down to scroll through the list. Pressing Right opens submenus (indicated with a tick) and adjusts variables when hovered over.

See the Notes page for more info about the debug menu.

This build's string database includes what appears to be a complete strings database from the PS2 and PSP versions of Ghost Rider, another Climax Studios title. 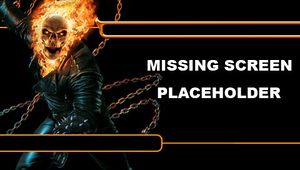 One of the many loading screens left over from Ghost Rider.

This build includes the title screen, as well as a whopping 41 loading screens left over from the PSP version of Ghost Rider.

It features a profile system which prompts for a "name" and a "tag", and is the only build which mentions an Autosave or networking features.

It's the first build with any sort of rudimentary quest or dialog system implemented.

The player begins in a prison cell, and after beginning a quest is approached by Hortius, who tells the player they're the chosen one and is immediately killed after trailing off in conversation.

Unlike in the previous build, this time the main menu item selections and pause menu graphics appear to be recycled from Ghost Rider. This build also contains the leftover save data icon and background from the PSP version of Ghost Rider.

This build improves upon the menus significantly. The remnants of Ghost Rider appear to be gone, and Hortius returns.

This build has several options for loading different levels in the main menu, as well as a pause menu with options to jump to several levels.

The levels listed in the pause menu are:

The levels listed in the main menu are:

The main menu also includes a "VSD Menu" with options for Melee, Magic, and Stealth characters. All three options spawn a character with different stats in the main prison demo.

This build appears, superficially, very similar in content to the January 31, 2007 demo.