From The Cutting Room Floor
< Proto:The Legend of Zelda
Jump to navigation Jump to search

This is a sub-page of Proto:The Legend of Zelda.

Level 9 has the largest amount of significant layout changes.

Like Level 4, this dungeon's Zols have a darker palette in the final release.

In addition to the standard Wizzrobe change, the blue Lanmolas were downgraded to Orange, making a room easier (For once).

Upper row: Standard Wizzrobe changes in the first two rooms. The second room has a bombable wall at the bottom, something that was removed in the final version. The third room has something that doesn't appear in any other dungeon in the First Quest: A trick wall! This was probably altered for being unintuitive. The last room's staircase leads to the Silver Arrow in the prototype, making this a required secret (there are no bombable walls there in the prototype). The last room's layout was entirely changed, and enemies were added.

Middle row: The right door in the first room is locked in the final version. There is a locked door in the third room of the prototype: this passage was removed entirely from the final build. The map in the final room was moved one room down.

Bottom row: The lower wall of the first room is bombable in the final version, but not in the prototype. The Patra room has a staircase in the prototype leading to the Red Ring. This was replaced with the map item. 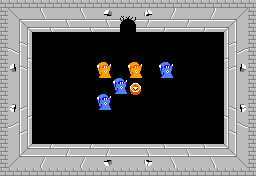 Why no bombable wall? There was no need for it yet. The room in the right eye doesn't exist at all in the prototype! There is a compass, but in a different room.

Oh, you know the drill by now.

To make up for the last Lanmola change, these two have been upgraded from orange to blue.

...though standard Wizzrobe changes apply. The layout of the middle room was altered to increase the level's difficulty.

And now the compass' location can be seen in the prototype. This room no longer exists in the final version. Probably made more sense to have rooms in both eyes than just the left eye.

The Silver Arrow location was moved to much later in the dungeon.

The Red Ring is located where the Silver Arrow was found in the prototype. The prototype's staircase was removed entirely.

The Patra room's staircase leads to a room one screen higher in the final version.

Likewise, the second to last staircase is located one screen lower in the final release.