This is a sub-page of Proto:The Legend of Zelda: Majora's Mask.

The Majora's Mask Preview Demo was a pre-release demo of Majora's Mask available on kiosks in stores like Walmart prior to the game's western release. 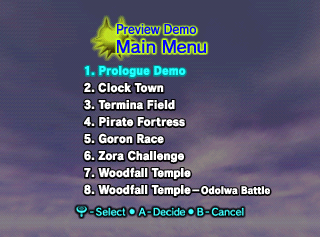 The demo opens with a menu that allows the player to select from eight different destinations, pictured below. It's possible to quit the demo at any time and return to this selection screen by opening the pause menu and pressing B.

The "Prologue Demo" option plays as if starting a new file in the final western release. Collecting a boss remains returns the player to the demo's selection screen, so it is not possible to fight Majora's Mask.

In the five options below "Prologue Demo", the player is given access to many of Link's items right from the start. This is contrary to the "Woodfall Temple" and "Odolwa Battle" options, in which the player's access is more limited. The "Goron Race" option is the most rich in content, since it gives access to spring.

Bombers' code, Oceanside Spider House code, and lottery ticket winning numbers are different on every play. You are named LINK.

Despite the limited choice of scenarios available from the demo's selection menu, the entire game is present within the ROM, and can be unlocked via hacking. Because the demo predates the western release, there are a number of differences between the two, as detailed in the Version Differences section.

Additionally, an unused texture suggests that the kiosk demo's setup may be based on the Majora's Mask demo shown at E3 2000.

The E3 texture, seemingly leftover from the E3 2000 demo, is found in the same file as the textures for the kiosk demo's select menu. The latter two textures, present only in Japanese, are contained in a file that seems to be loaded into RAM whenever Link enters a new map. However, there doesn't appear to be code left over to display them.

When the countdown timer from atop Clock Tower appears on-screen, use the Quit option on the pause menu to return to the main menu and choose another location. The timer will continue counting down in the new location. If "Prologue Demo" is selected, you can be sent to Clock Town and skip the Deku Scrub transformation if you allow the timer to run out to trigger a moon crash.

Selecting "Clock Town" from the main menu will not have music playing in town until you re-enter from a building or Termina Field.

Link's oinking is not audible.

In all but the "Prologue Demo" selection, you start with five extra heart containers. They did not come from any legitimate source, which makes it possible to exceed the normal maximum of twenty heart containers without use of a duplication glitch.

In Woodfall Temple's boss room, the overworld map will show in the pause menu and without Link's icon. His icon will show on the map only if you enter any grotto from Termina Field from any selection in the main menu. The icon will be where Clock Town is and you cannot move the cursor onto it. The effect remains until you reset the game.

Unlike in the final western release, a moon crash saves what you collected. It does not update Heart Containers and Heart Pieces (freestanding ones only) into a state of being collected, making them reobtainable.

It is possible to collect a Boss Remains without being sent to the main menu, but only for any one of them.

Unlike its behavior in the final western release, the unused save screen returns the player to the title screen, rather than saving the game.

The data of what you collected and equipped is being preserved after a moon crash as if you used the Song of Time, with a few differences. Heart Piece/Container models don't update into a state of being collected, introductory camera panning triggers like in Pirates' Fortress will be reset as if the player never watched them, and any of Tatl's one-time messages that were triggered will be reset to be available again.

When you are in the boss room, the dungeon status in the pause menu will display the overworld map. This means the Song of Soaring would warp you to an owl statue instead of the dungeon's entrance. This does not happen in other boss rooms.

If you choose "Woodfall Temple-Odolwa Battle" from the main menu, you will not be taken to the temple's entrance if you die. Additionally, you cannot escape with the Song of Soaring because you are in the overworld state with no owl statues activated. However, the Song of Time can be used as a means to escape, as long as if the boss is not defeated.

The horse will not be present at the ranch in any of the main menu selections, including "Prologue Demo". Instead, she will be outside of the West Clock Town entrance, but only after you reset the cycle via Song of Time or a moon crash. Epona's Song is needed, which all but the "Prologue Demo" selection already give you. In the "Termina Field" selection, she is presented immediately without the need to reset the cycle.

The position for the cutscene trigger of Tatl pointing at Epona in the ranch is spotty and different from the final western release. On the First Day, the trigger position is near the Gossip Stone closest to the Doggy Racetrack. If you do not trigger this cutscene before learning Epona's Song, it will play automatically after learning the song and that will make you be in permanent cutscene mode, resulting in a softlock.

The kiosk demo lacks the ability to save at owl statues, which was introduced in the final western release.

If you're in the poison water as Zora Link in Woodfall outside of the temple and die, he will be lit on fire. This does not happen in any other area with poison water. In the final western release, the death oddity in Woodfall was removed.

If you successfully complete the Expert course by scoring 30 points you can still walk around for a while and do things like leaving the area. In the final western release, you lose control right away after slashing the last log.

It is much harder to get because you have to be exactly frame perfect. In the final western release, the last digit of the milliseconds counter was cut out, which allows for a certain margin of error and makes it easier to press A at the right time.

Great Bay Coast's area subtitle bar doesn't show up after you exit Zora Hall or Waterfall Rapids. This was added in the final western release.

When the camera overlooks Termina Field during a day/night transition, the screen HUD will not appear before the camera returns to Link. It does happen in the final western release.

At night, if the Song of Double Time storage glitch is activated during loading to a location where a day transition does not reload the area, time will skip ahead to a day later than the song under normal use would take you to. In the final western release, the glitch would only reset the day the same as it does in locations where a day transition does reload the area.