This is a sub-page of Prerelease:The Legend of Zelda: Ocarina of Time. 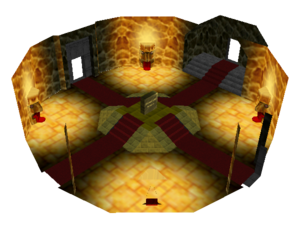 A room from Fstdan, one of the early maps recovered from the leak

On July 25, 2020, development resources for a number of first- and third-party Nintendo games, including Ocarina of Time, were leaked on 4chan. The files seem to have been resources sent by Nintendo to iQue in order to help them develop the iQue port of the game. Lucky us!

The file z_actor.h in the folder z_ocarina2 contains the following commit log note:

The source code indicates that a memory register called SEX, known as "Rs" in the Debug ROM, was named by Kazuaki Morita. Morita is credited with the programming the bosses in Ocarina of Time. Additionally, according to an Iwata Asks interview celebrating the release of Ocarina of Time 3D, the Fishing Pond was also his side project and brain child.

Morita: The Water Temple is in Lake Hylia. Aonuma-san designed that dungeon. The boss that appears there is Morpha. Just when I was making that, there was a landform like a pool.

Iwata: Morpha rises up out of the pool and fights Link.

Morita: Right. When I was making that boss, I casually…

Iwata: "Casually"? (laughs) I doubt you had that kind of time!

Morita: But for some reason I did. (laughs)

Morita: I just happened to have a model of a fish, so…

Iwata: You "just happened" to have it? (laughs)

Morita: Yes! (laughs) A model of a fish for putting in an empty bottle. I borrowed that and had it swim in the pool in the dungeon, and when I saw it swimming around, I thought, "Oh! I can go fishing!"

Iwata: What did you do for a fishing pole?

Morita: I took the model for something and made it a cylinder, and then… (gestures as if casting a fishing pole)

Haruhana: You used the motion for Link swinging his sword.

The aforementioned note seems to be instructions from Morita to the other staff for checking out the in-progress version of the fishing functionality he was working on. Following the instructions in the note verbatim produces no noticeable results upon entering Morpha's boss room from the Map Select screen, regardless of Link's age. Even with SEX69 (Rs69) [no comment...] set to 1, the Morpha battle starts as normal. This may indicate that the "secret" that was accessible via this method may have been removed sometime in the 7 months between the commit log note and the game's release.

However, one additional point to keep in mind is that the Water Temple boss is now number 80 in the Map Select options, while the Water Temple is number 79. This may indicate that Morita's fishing preview was created at a time before the boss rooms were split off from their Temples into separate map files, as they are in the final game. As such, if one were to attempt to enter Room 0x16 of the Water Temple (the boss transition room) without automatically being loaded into the map file for Morpha's boss room in the final game, one could still see the intended effect.

The source code indicates that a memory register called KAZ, known as "RK" in the Debug ROM, was named after Kazuaki Morita. Morita is credited with the programming the bosses in Ocarina of Time.

A file called z_actor.c in the folder z_ocarina2 contains the following code used for spawning the Arwing.

As it suggests, setting KAZ00 (RK00) to -100 spawns an Arwing above the player, then rolls the value back around to 0.

z_parameter_h.h contains early names for some items, as well as identifications for others that were dummied out of the final item list.

Additionally, Silver Rupees are worth 5, not 10, in the final game.

Around 0:39 in the track, the dulcimer seems to be louder and more staccato.

Lodgenet was a service predominately used in North America that allowed hotel guests to play Nintendo 64 games from their rooms. Each game featured on Lodgenet had to follow a list of guidelines to be published to the service, namely remove the ability to save and remove multiplayer features (as can be seen in this Star Fox 64 video). The Ocarina of Time Gateway version is technically the only released version of OoT that has yet to be documented and analyzed. Thanks to build information found in the source listed as GATEWAY_VERSION, it offers insight of what was included in this undocumented build.

Here is a function to clear the saves for Lodgenet usersː

According to the section "ロムヘッダ定義（仮）" (ROM Header Definition (Temporary)) in GNUmakefile,v the initialization for the PAL Gateway version is NZLL, while the default Gateway version is CZLG. In comparison, the codes for the other versions of the final game are CZLJ (Japan), CZLE (North America), and NZLP (PAL).