This page details one or more prototype versions of The Magical Quest starring Mickey Mouse. 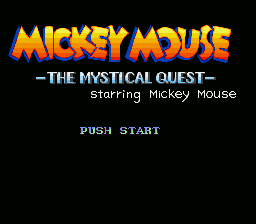 An early prototype of The Magical Quest, then titled "The Mystical Quest", was dumped anonymously and then released on November 18th, 2018. Hand-written labels on the ROM chips give a build date of 1992/5/21, six months before the game's Japanese release date. The date lines up with Summer CES 1992 (May 28th to May 31st), so this is almost definitely the build featured there.

The game isn't even half done at this point: Only two out of the six stages are finished, with areas from later stages only being present in rough outline form.

It seems that someone on the development team was nostalgic for the old system; the old control scheme appears as a setting in the Options menu in future games. 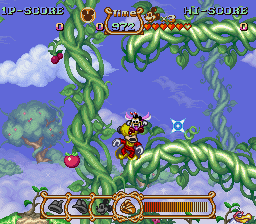 The second item is this pulsating star, which probably would have provided temporary invincibility.

Most of the music for the game hasn't been composed yet. There are a few tracks in the prototype, though, that are never used in-game: Use Pro Action Replay (PAR) code 018127XX, where XX is the track ID, to replace the title screen music with that track.

Note that the World Map music is used as a placeholder track if the player tries to enter Stages 3-7.

Track ID: 53
This happy little tune occupies the same slot as the General Store music in the final version, though it's not clear if it was intended for the same purpose.

Track ID: 54
A jolly jingle with an unknown purpose. This slot is used by the Game Over music in the final game, even though an identical Game Over track is in slot 50 in the prototype. Not sure why they moved it.

Track ID: 55
This is identical to the music in the final game, it's just unused at this point.

Track ID: 56
The World Map tune is about three times as long in the prototype! Unfortunately only about 8 seconds of the track can be heard before the game loads the next area, which is likely why it was shortened in the final game. After it was trimmed, the backing melody was made a little more complex.