This page details one or more prototype versions of Trouble Shooter. 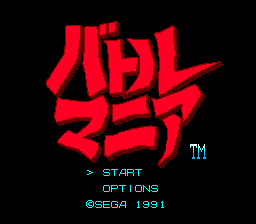 This prototype was built on May 28, 1991, about six months before the release of the US version and over nine before the Japanese version's release.

While the levels appear to be finalized in terms of graphics and design, there are various presentation-related things throughout the game that remain incomplete.

The game's serial number isn't present in the prototype header, instead stating "exercise only". The build date is one year earlier than in the initial US release. Director and programmer Takayan stated in a 2004 interview:

There were actually very few man-hours spent on the project, although it’s impossible to know exactly how many now. Because of its slightly strange development process, I finished the game in 1990 but it didn’t get released until 1991.

Maria's hair isn't tied back in her portrait here, though it is in all her other appearances. The early version actually matches the hand-drawn art seen in the Japanese manual.

Looks completely different. It's much simpler, featuring no animation and only having basic shading. The copyright text reads ©SEGA, perhaps suggesting they were intended to publish it rather than Vic Tokai themselves.

This first line of dialogue from the Colonel was added to the final release.

A single hiragana character was changed in this line from the villain: ず (zu) to づ (dzu). This is just a typo that was fixed, as かねづる (kanedzuru; financial backer) is a word while かねずる (kanezuru) is not.

As mentioned above, the cutscene graphics aren't implemented yet.

The cheerleaders are missing from the background. Instead, the corner of a black vehicle can be seen on the left side of the screen.

(Screenshot from English version used for comparison as it's an earlier build than the final Japanese release.)

This opening line was rewritten to be less awkward.

Fumito Tamayama had his pseudonym changed from "M.C. TAMAR" to "BAKKIN! TAMA".

"PROPELLER WADO" had the spelling of his pseudonym corrected.

"SHO-CHAN" was added to the Special Thanks.

This bit of text was added to the final release...