From The Cutting Room Floor
< Proto:Unreal
Jump to navigation Jump to search

This is a sub-page of Proto:Unreal. 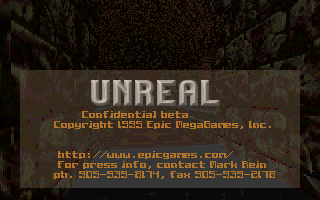 The Unreal 1995 Tech Demo is an early prototype of Unreal made about two and a half years before the final game came out. Needless to say, there is an enormous difference between this and the final version. In fact, nearly everything in this prototype did not appear in the final version with the exception of the editor's 3d view. The “gameplay” in this prototype is nearly non-existent; all you can do is walk around a few levels and fire bouncing light sources at nothing.

This prototype seems to be designed purely around a fantasy theme, as there are no futuristic textures anywhere in it.

A good deal of the Tech Demo's interesting keys are not documented in the .HLP file.

When UNENGINE.dll is read in a hex editor, strings for characters named "PWoman", "RedDragon", "Gargoyle" and "JWizard" can be found in it. However, attempting to hack them into a level will make the game load the generic actor icon used in the final UnrealEd.

Strangely, the .HLP file included with the tech demo lists the Woman, the Dragon and the Gargoyle as functioning, even though they clearly are not. Even stranger is that the .HLP file is older than the .exe file that the Tech Demo uses.

Textures used in levels are stored in their UNR files. The GRAPHICS.UNR file contains default texture, fonts and icons. There is one graphic, the skybox texture, that can be accessed easily. Other textures can be exported using command:

Note that all of the images in this section have had their brightness increased because the default lighting is very dark and it cannot be adjusted in-game.

Eric is the first level.

Eric starts the player facing the sky on a balcony. If you turn 180 degrees, you'll find a path that leads inside. Go in and you'll be on a bridge the player can fall off of. Continue forward and you'll find yourself in a large room.

This large room has two floors. If you came here from the bridge, you'll be on the second floor. If you fell off of the bridge, you'll be on the first floor. Either way, there is no way back to the second floor if you get to the first one. On one side is a detailed stairway and arch that leads to a dead end. There are two pillars near the stairway that have what appear to be two light entities on top of them. On the other end is an arch that leads to where the player lands if they fall off of the bridge.

A large, mosque-like building exists in this map and can be found by walking into the sky west from the start of the map. It's quite detailed and doesn't appear to be linked to any part of the map. On the lower-right side of the mosque is a tower and an incomplete floor. The interior can be accessed by selecting “New Window”, but it only consists of a semi-detailed hallway and a blank room in the middle of the mosque.

You'll start Cliff facing an archway. Going forward, you'll be in a small, rectangular room that has a light entity on one side and an archway to another room across from the first archway. Past the second archway is a large room with two staircases near the archway, two glass window textures with light entities in front of them, and an alcove with a light source in it. If you go up the stairs, you'll be in another rectangular room, but this time there are two windows looking out to the room you spawned in.

Going back to the room you spawned in, you'll find a few interesting details in it, such as pillars with a strange-looking wizard engraved on their base and sewer grate textures. To the right of where the player spawns is an archway. If you go through the archway, you'll end up in another rectangular room, but this one is filled with several light sources.

That's all there is in this map.

The middle right path leads to a medium-sized room that is filled with pillars using a marble texture and a lighting icon. Scattered throughout the room is the wizard engraving texture seen in Cliff. Across from where you enter the room is another hall, but it leads to a dead end. To the left of where the player enters the room is a hall that leads to another room.

The last room in the level is a surprisingly complex room with multiple floors and windows. Across from where the player enters the room is a staircase that leads downward. After going down the stairs, the player will be at a fork and a small window. Both paths lead to dead ends that are blocked off by marble-textured walls.

If the player turns left when they enter the last room, they'll find a pathway that leads to the second floor. The second floor contains a very large window, two square-shaped parts on each side of the floor and a strange-looking etching that never appears anywhere else in the prototype.

James is the shortest map in the prototype.

The player spawns facing the top of a stairway. The player will be able to go down the staircase, but it quickly leads to a dead end. Going back up the stairs, the player will be in a room with two pillars, a window to the right of the staircase and two paths in the very pack. The bottom of the walls in the room have a stylized flame texture on them. The left path leads to a dead-end with a neat-looking door texture not seen in the final game, while the right path leads to a dead end that uses the wall texture seen throughout the map.

Unreal is by far the largest map in the prototype. Note that many copies of the proto have this level missing because it had no batch file originally and it wasn't present in the Maps folder, thus being always overwritten and lost when the player ran any of the .bat files used to launch the previous levels.

The player spawns in the middle of a circular room with crosses on the walls and black marble floor tiles. Should they turn back, there'll be a corridor leading to a small room which in turn leads into another corridor with a dead end. Should they take the frontal-left path instead, they'll end up in another dead end room. The right path leads into more corridors and eventually, another intersection. Taking the right path on the intersection will lead the player into a room with several props near the ceiling, aligned into a star pattern. Taking the left path instead leads into a room with the cross texture being misaligned. The crosses there are horizontal instead of vertical. Following the path further will eventually lead into a large multi-layered room with a visible sky and just one exit, another corridor which will split into two cave-like appendages both leading to the same large balcony. Between them there is a place where the player should jump down, but approaching it crashes the game.

UNREAL is played in Eric.

This song also appears in a 1996 trailer for Unreal.

UNREALS is played in Cliff and James.

UNREALT is played in John.

The 1995 Tech Demo contains a very early and incomplete version of UnrealEd1. To access it, create a shortcut to UNREAL.EXE, then add "-editor" as a command parameter, then click on the shortcut. When the game is started this way, it will show just the console. Access the "window" option in the menu, then click on "New Camera" to open the editor viewport.

This version of UnrealEd is unusual in a few ways. First, you cannot place any brushes nor entities in a map. Second, the console prints "SERVER: Login accepted" and "SERVER: User Editor logged in" when you first start the game in editor mode, which is rather weird terminology to use when activating a game's editor. Lastly, there doesn't seem to be any way to load any preexisting maps into the editor; editing the included .bat files to run in editor mode will make the game load a blank level, not the level included with the .bat. Note: This is because there is a special command to load maps as have been found out. Loading the individual maps have been made possible and even switch to multiple modes. You can manipulate brushes but you cannot really create new shapes with the basic functionality and lack of full editor.

These are likely to be rendering options for 3d view, but since you can't place any brushes in the maps, they do nothing.

These options change the editor port's view so that it shows a map from a certain angle. However, since there's no way to place brushes as reference, all of the viewports look the same.

These options let you toggle what parts of a map you want to see. You can't place either brushes nor actors in a map, so these don't do anything.

Prints a readout of your current coordinates on the bottom of the screen.

This is checked on by default. Unchecking it will make the blue grid on the screen disappear.

Selecting this enables anti-aliasing, making the grid much brighter.

Note that all of the regular in-game keys work while in the editor.

UNENGINE.Dll contains several interesting text strings in it if viewed in a hex editor.

These text strings confirm that the user can save and load levels in the editor, but if these functions are actually working in this prototype is unknown.

A very, very large amount of error messages for UnrealEd exist in the .dll, showing that the editor is entirely contained in the .exe. The question is whether it's possible to activate the rest of the functions in it?