This page details one or more prototype versions of WWF Attitude (PlayStation). 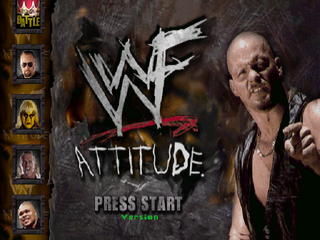 A prototype of WWF Attitude for the PlayStation released as part of Hidden Palace's 'Project Deluge'. It is dated April 28th, 1999 which is almost three months before the final US version's build date.

Many strange characters named after types of moves are in the "Featured" section of characters. 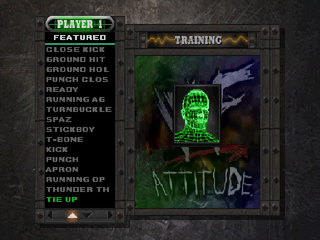 The April 1999 build of WWF Attitude has a total of 59 masks compared to the final version's total of 43 masks.

Grouped in with the masks for created wrestlers is what appear to be Yoda and Chewbacca's faces.

As this build is from about a month before Owen Hart's tragic death, it still features Create-A-Wrestler parts of his Blue Blazer gimmick. These were most likely removed out of respect as this gimmick was heavily tied to his untimely death. 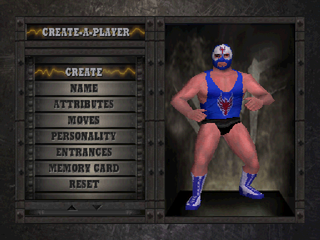 Two selections of face paint were once both white and black, but later became green and black and purple and black respectively. This change was very likely because of the two selections' uncanny similarity to the face paint of Shaggy 2 Dope and Violent J of the music group The Insane Clown Posse, who appeared on WWF programming in 1998.