This page details one or more prototype versions of WWF SmackDown!.

A prototype build of WWF SmackDown!, internally dated December 8, 1999, although the title screen build date says otherwise. Depending on the date, the game is almost complete at this point, but naturally some changes exist.

The title screen is noticeably different than the final, and has the build date present in the upper-left corner (January 6, 2000 6:05:29). This date contradicts the dates on the files on the disc.

The selection screen pictures of the wrestlers almost look like mugshots. The order of the selectable wrestlers is also different, and some moves are spelled differently (for instance, StoneCold Stunner instead of Stone Cold Stunner in the final).

Chyna's skin color is dark in the prototype and white in the final.

Godfather's hos in his entrance had their upper and lower parts changed so they look less like ring girls (or alternatively, in case of the brown-haired girl, a joshi wrestler).

Also of note regarding entrances is that many of them print the nameplate as soon as the video begins. In the final, these are timed to when the specific wrestler appears on screen.

When you actually play a match, under the health bars are 2-4 lines of debug code (changes depending on how many wrestlers are in a match) that cannot be turned off.

Bits of debug code appear in the top-left corner during cutscenes in Season Mode. Pressing L1 + L2 will bring up more debug code and bars.

This was obviously still being worked on, as there are quite a few remnants of debug code and spelling errors...oh, and crashes.

The camera can be controlled during cutscenes by pressing Start or Select on Controller 2. 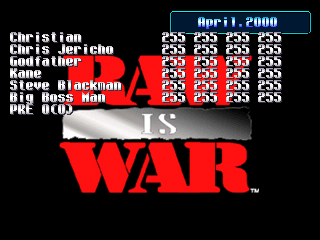 At the screen where it shows the date and which show is next there is a list of wrestlers with numbers next to their name, pressing R2 and L2 changes the wrestlers in that list. 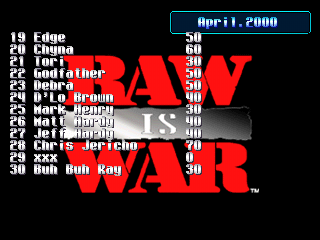 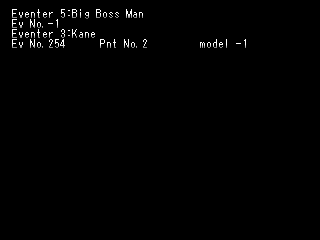 After that screen, sometimes it will show a black screen with some debug code (maybe for cutscenes?). 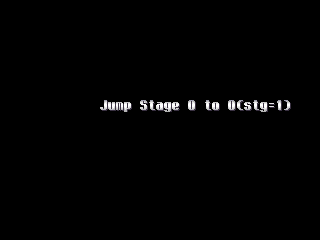 A similar screen shows up in Pre-Season Mode, which lets you skip or go back by holding R1 and pressing Right or Left, then pressing Square or X to confirm...although this will sometimes crash the game. 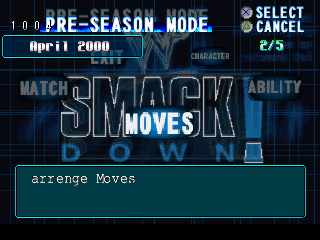 There are numerous typos with the word "arrange" on the Pre-Season main menu. 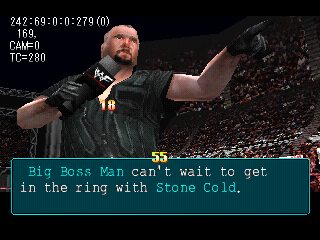 Character names are in a different color in the text boxes during a cutscene, whereas the final has them the same color as the rest of the text. A number also appears in the top-middle of the text box. 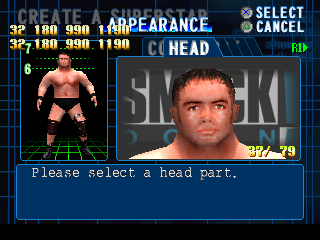 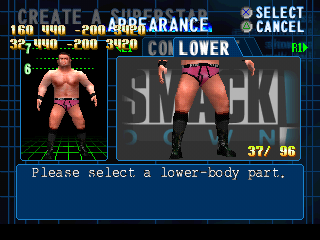 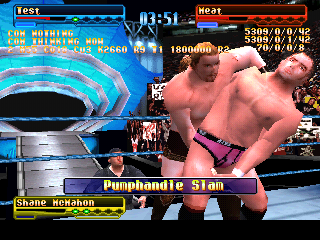 In this build you can create Shawn Stasiak as Meat. Even though the gimmick had been phased out by this point, Stasiak himself was still under contract and so he had a place here. He ended up being fired not long after, however, necessitating his removal from the final version.

Parts for Droz can be found on the disc. He can no longer be created in the actual game, though, as they were removed from the create-a-superstar appearance part list. This was likely done out of respect, as he was severely paralyzed after an in-ring accident during a SmackDown! taping in October 1999, in a match against D'Lo Brown.

Droz is mentioned by name in the Season Mode menu at 11E36C. Meat and Droz are both also mentioned in Simple 1500: The Pro Wrestling's debug menu. 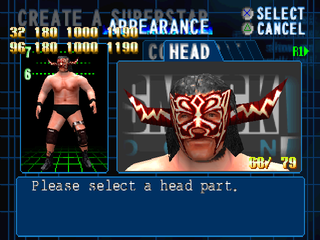 In addition to Meat and Droz, this mask design (sometimes attributed to Psychosis) exists in the proto but was removed from the final game.

The visible eyes on the knight helmet part were blacked out in the final.

The face paint versions of the blonde and old man heads had their designs changed in the final game, most likely to reduce their similarities to Sting and Road Warrior Animal.

Finally, one of the original mask designs had the American flag and the "& PEACE!" text blacked out, although the latter is still slightly readable. This may be more trademark obscuring, as the proto version resembles the mask of "The Patriot" Del Wilkes. 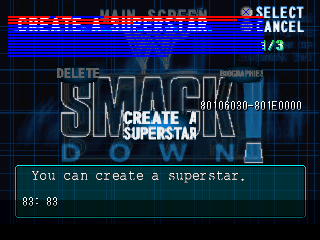 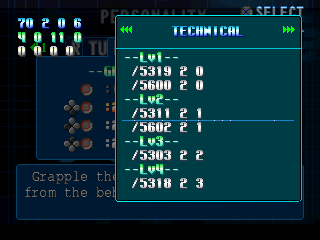 Two options were removed from the game's pause menu: difficulty and DualShock vibration configuration. In addition, the color for the currently chosen setting is also changed.

It appears that this build is later than the one used by GameSpot for their screenshots, considering the infamous "3 Way Dancing" is replaced with the more sensible "3 Way Dance". It seems other things are mistranslated or mistyped, such as "Punphandle Slam" and "matchmakes" (Create A PPV mode was named Match Making in this build).

Some default title holders were updated between the prototype and final release, likely to keep the game up-to-date with WWF programming at the release date: