This page details one or more prototype versions of World of Illusion Starring Mickey Mouse and Donald Duck.

The origins of this World of Illusion prototype are a bit mysterious. It's one of those 16-bit prototypes that's been around for so long that it's not clear who dumped the cart, or when it was originally dumped. It seems to be a build of the game from around the time of the 1992 Summer Consumer Electronics Show, though with the number of debug features present it doesn't seem to be that exact build.

The date in the ROM header is September 1992, compared to October 1992 in the final game. This is almost definitely a projected game completion date rather than the actual build date, which would be some point around June 1992. 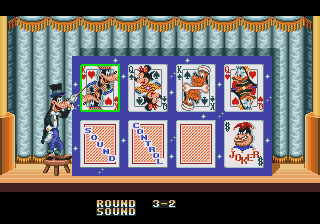 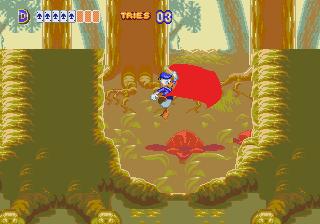 Both Mickey and Donald's sprites were polished in the final version. The following changes keep the characters closer to their official models, and applies to almost every single frame of animation:

Interestingly, the final version's cutscenes still use the prototype player sprites! It seems that SEGA made the choice to redo the storybook pictures in full color before the character designs were updated.

These graphics are unused even in the prototype. They're nowhere to be found in the final game, having been deleted to make room for new graphics.

Though these sounds aren't actually used in the prototype, they can be heard in the sound test. They differ so much from the final sounds that they probably weren't even intended for the same purpose.

Even though none of the in-level dialogue triggers are present in the prototype, most of the text is in the ROM. All of the text differs significantly from the final draft.