This page details one or more prototype versions of Yoshi's Cookie (SNES).

A prototype of the SNES Yoshi's Cookie was dumped by Atamos and is dated 1/19/93, five months before the game was released. As you'd expect, there are several differences from the final.

The logo is choppier and more saturated at this point, all the text is positioned differently, and the trademark symbol is missing.

The prototype's title screen is a 16-bit version of the NES and Game Boy versions' title screen. Puzzle mode seems to be absent. Strangely, the final version gets its own unique title screen, with this intro sitting unused in the ROM.

Mario has been redrawn slightly, and "ROUND" was changed to "MODE".

The main gameplay has a few differences. One major feature is that you can press R to skip rounds.

All the text at the top of the screen is in a different, thinner font, and the cookies are shaded differently. There's also a meter below Yoshi that fills up when you complete a row. When the meter fills up, the meter next to it slightly fills up. When the second meter fills, the round is complete. This was removed in the final.

When you complete a round, Mario's eyes are open in the prototype.

Yoshi's eyelids have been altered and he has orange shoes in the prototype.

Mario has white unshaded buttons in the prototype, just like his original Super Mario World sprite. They were made yellow and given shading for the final game.

In the ending, the "END" text is yellow, nothing falls from the sky, and Mario and Yoshi are in different positions.

Yoshi has thinner hands, a longer tail, and orange shoes; Princess Toadstool has an orange-ish pink dress and crown; and the gap between Bowser's legs is thicker.

In the prototype, the font from the text is thinner (except for "WIN!" and "LOSE") and everyone's favorite typo is made, saying "CONGRATULATION" instead of "CONGRATULATIONS" at the end of Vs. Mode. This was fixed in the final game. 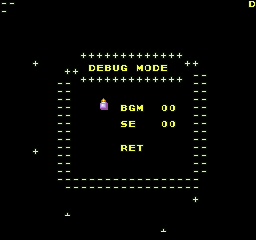 There's a debug menu only seen in this prototype, but all that's in said menu is the sound test. Press L + R on Controller 2 at the title screen to access it.

The most obvious difference between the prototype and the final game is the soundtrack. The prototype has an almost completely different soundtrack, with the only two unchanged tracks being the Vs. Menu and the cutscene music.