These unused graphics have only been found in v0.09 thus far.

A brightened version of the ChipSet used for the Witch's Island. Strangely, the red tentacle in the manhole is not brightened. 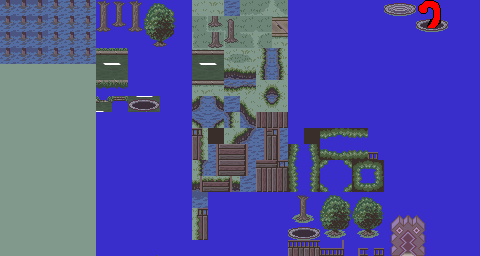 A duplicate of the inside of Poniko's house with the lights turned off exists in the ChipSet folder. It isn't any different from the version that's used in the Panorama folder.

The only remnant of the Stairs Debug Map from older versions. The map itself is no longer present in v0.09. 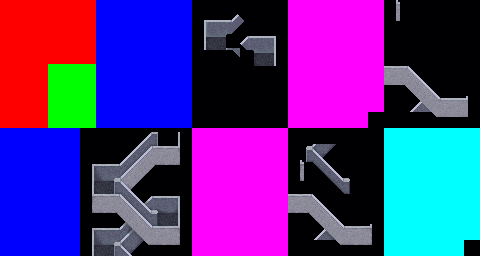 There are a few hidden images in the Thumbs.db files in v0.09, including scrapped backgrounds for rooms that would have been in the White Desert!

These graphics were also unused in v0.08 or earlier versions.

The wake-up pinch sprites for the 8-bit version of the unused Blindfold effect still exist.

A second stone graphic exists in FC World's tileset, but is never used. It has a different design from the other stone graphic used in version 0.10.

Many of v0.10's unused graphics are also present in v0.09. They are listed here for reference, with more details available on v0.10's page.

Crick in the Neck

The chair is able to face two other directions on its own. The in-game version is in the middle for reference.

The in-game version is in the middle for reference.

The elevator that is used is on the left for reference.

The friendly toriningen in the Mall has sprites for facing other directions, but it only ever faces forward.

These CharSet graphics of NASU are part of the unused NASU Link event in v0.09, but can't be seen during normal gameplay.

There are differently assembled variants of one of the floor patterns in Neon World.

Stairway to the Sky

The only sprites of the Squish-Squish NPC that are used in v0.09 are the flabby-looking sprites, though the rest of the sprites can be found in the debug map.

The light at the bottom of the ladder in the Static Maze from v0.04 and v0.06 can still be found in FC World's ChipSet.