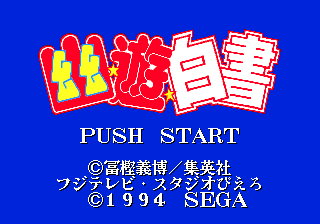 A prototype of Yu Yu Hakusho: Makyou Toitsusen dated June 1994 (a month before the final) was found on a Sega Channel development disc from January 1996. The original BIN file was oddly missing, but two LZSS-compressed copies (YU_YU.GI and YU_YU.SA) were present.

While there are a number of differences from the final game, perhaps the most notable aspect of this prototype isn't even related to the game at all.

The "GM" code in the prototype is copied from Gunstar Heroes.

The Treasure logo screen and intro sequence are missing. It jumps straight from the Sega screen to the title.

The title screen itself was completely overhauled for the final. The prototype displays the traditional Yuu Yuu Hakusho logo on a solid blue background with no subtitle. The final version uses a unique calligraphy-style logo on a textured background.

The prototype music uses the ending version of "Smiling Bomb" (track 89) rather than the title versions (tracks 92/93), which are still present in the prototype sound test.

The options menu was translated from English to Japanese. Controller configuration settings and a help section were added. 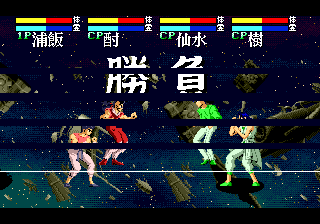 One option that was removed from the final menu was "CHECK". Turning this on enables a CPU meter of sorts. Press X at any time to turn it on/off.

"Smooth Criminal" from Michael Jackson's Moonwalker is used as a placeholder in several spots throughout the sound test. Yes, really.

The song stands in for the following tracks:

Younger Toguro is completely missing from the prototype screen. The game crashes at the beginning of the match if you try force-selecting him, and he has no graphical data left in the ROM, so he likely wasn't finished yet.

The characters were spaced farther apart in the final version, presumably to make them easier to select. Jin was also flipped the opposite direction.

The player can choose which palette a character uses by selecting the character with either A, B, or C. A (also Start) selects the default palette, while B and C select the alternate palettes.

For his default palette, the red used in Kurama's hair, shoes, and belt was made a darker shade. The deep purple outlining his pants and sleeves was also darkened to a bluer shade.

For his default palette, the purples used for Hiei's pants were darkened. They were previously the same shades of purple used for his shirt. The turquoise used in his hair and belt was also darkened.

Hiei's third palette was changed from red and green to all-green.

Starting at 0x154BC0 in the ROM are leftover graphics from Sonic Crackers!

The data consists of Tails' sprites for the overhead "Field" areas: his walking and standing sprites seen in the April 1, 1994 build, plus a bunch of newer animations.

It's not clear what this one is. Might be an animation for throwing the other player.

Tails holding the Combi ring (and by extension the other player) back.

Seems to be a triumphant pose. Not clear where this was meant to play.

Tails' staggered animation, which would be triggered after taking enough consecutive damage.

Running animations for Tails. He's also carrying the other player.

Crouching sprites. It's not clear how this would've worked, since Down is used to move in that direction in Field levels.

Spin Dash animations. Seems like the logical next step after crouching.

This would presumably be used for a flying animation.