A version for the SNES was planned, but eventually scrapped. 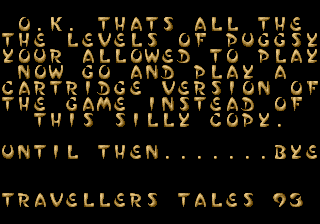 Although the official retail cart does not contain SRAM, the game attempts to write to it anyway in order to detect third-party copying devices (which always contain SRAM). If the write is successful, the game will appear to function normally, though the player won't jump as high as normal. In addition to this, after clearing a few levels the game will stop and present the player with a personal "gotcha" message from the Traveller's Tales devs. Rather infamously, many emulators which blindly create SRAM regions for each game will also trip the check.

The game also tries to prevent these tests from being easily detected and removed - there are six write checks split into three sets, with one of them stored at the end of a subroutine called four times throughout the game, another checked once immediately before one instance of the subroutine call is executed, and the third in a vertical interrupt routine. The SRAM address the game checks also cannot be detected easily, as the game loads an address some random distance away from the actual address and adds the distance immediately afterward through lea instructions. All checks have different base values and distances.

In order to easily pass Sega's quality checks, many variations of the Sega logo screen were implemented and could be selected by simply changing the version code in the ROM header. This is what it's set to by default:

The numbers after "VER=" are as follows: 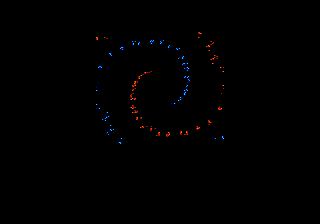 If you take five specific letters in A Hidden Place, stack them on top of each other, and push that stack through the exit gate, you can unlock interesting effects. These effects are listed in the order the game checks, and take effect after the score tally:

A short track that's not used anywhere. It's too short to be a stage theme.

Junior mode, which can be accessed on the title screen, is a demo game for beginners that uses level layouts from the main game. The levels and items used in this mode were changed for the US version, likely because the European version was rather challenging for beginners.

While both versions end with the boss from the Pyramids, it only takes two hits in the US version as opposed to seven in the European version.

The chart below illustrates which levels from the main game were used for each Junior level. The Light House 2 was originally a hidden level in the European version; this was moved to Level 5 in the US version.

The map screen in the US version was altered as a result of the aforementioned level changes.

The levels that are shared in both versions - Beach 3 and The Light House 2 - have different item layouts in US version to make them easier, while the European version stays closer to the layouts found in the full game.

In the US version, the staircase of barrels at the beginning is already fully assembled, and a stack of coins and extra lives has been added near the switch at the end. The US version also uses the music from A Hidden Place.

In the European version, the boss starts with all 6 hit points like the main game. The US version dropped this to 1.