Putt-Putt Joins the Parade is the first of many games developed by '90s edutainment juggernaut, Humongous Entertainment. Join the titular purple convertible as he runs mundane errands and struggles with awkward lawnmowing controls so he can earn enough money to enter the Cartown Pet Parade!

Probably most notable for being produced by Ron Gilbert, creator of the Maniac Mansion and Monkey Island series, allowing this and most subsequent Humongous releases to run on the powerful SPUTM engine (popularly known as SCUMM) used in those games.

A placeholder or error handler for the save/load screen when no preview image is available for a room. Variations on this appear in practically every Humongous game.

These tracks and their names come from the 3DO version, but equivalent data exists in all releases.

A simple SCUMM script seemingly used to check that the game's rooms load correctly remains in the finished product. Running script 35 (most easily accomplished with ScummVM's debugger) causes all the rooms in the game to display sequentially in internal room order for five seconds each, starting from room 1 (Putt-Putt's front lawn) and continuing up to the last room (room 28, the parade sequence). Rooms wider than the screen scroll from left to right to show their full area. If debug output is enabled, each room transition is accompanied by a console message of the form "this room is # x".

Almost all SCUMM-based Humongous games contain debug console output for various game bits and bobs (starting and stopping music, values of important variables, etc.). These aren't normally displayed; the simplest way to view them is to run the game in ScummVM and set its debug level to 0 or higher. 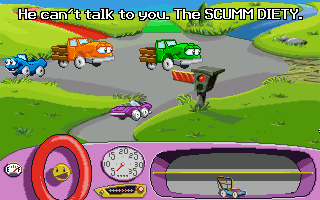 This error is displayed as a subtitle when the engine can't initiate a conversation for some reason, such as the requested actor not being in the current room. Forcing script 10 to run will trigger this message during most parts of the game.

In the floppy disk version, one of the toys in the Toy Store is a "Box O' Blocks" that cycles through a few animations when clicked. In most CD-based releases, it's replaced with a joke-telling minigame to take advantage of the extra space, and possibly since the developers felt like the blocks inside the box were LEGO brick knockoffs (though the Japanese 3DO release omits this, probably to avoid localization headaches). Versions with the joke tellers still contain the Box's graphics and scripting, but disable them by swapping out the clickpoint that triggers them.

The Box seems to have been a fairly late addition—its animations are stored separately from everything else at the very end of the game's data.