In his third outing, Putt-Putt Saves the Zoo (spoiler alert!). He also gets caught up in some bizarre developer in-jokes, has his driver's license set to expire in late 1999, and hurls from eating too much cotton candy. And as if that wasn't enough, there's a demo version with even weirder stuff.

Ahh, the glory days of the multimedia era... 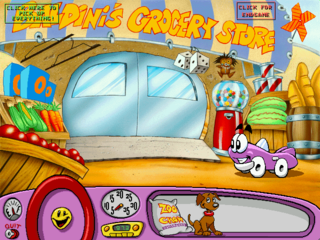 Like most Humongous games, this one has a debug mode, activated by adding the line SuperCool=71595 to the hegames.ini configuration file. This adds two buttons to the front of Baldini's Grocery Store: "CLICK HERE TO PICK UP EVERYTHING!", which puts all plot-necessary items in the inventory, and "CLICK FOR ENDGAME", which triggers the ending sequence.

Adding the line I♥Porkdude=71595 (note that the second character has to be 0x03 in order for it to work) to hegames.ini enables the following debug keys in the Ice Hockey game:

A guide for aspiring managers to why you should keep a tight leash on your devteam.

Add HolyMoley=71595 to hegames.ini and click on the gopher hole in the Grasslands (it's the tuft of grass in front of the lions). Presumably excised for religious content, as mild as it is.

Add IAmTheMoose=71595 to hegames.ini, click on either of the joke-telling toucans in Jungle Land, and prepare for the most thrilling two minutes of your life.

Add MoveInHerds=71595 to hegames.ini and click on the observation point in the grasslands. This is a reference to a line from Jurassic Park; the second half of the line is present, but unused.

Add UpChuck=71595 to hegames.ini and get cotton candy from Chuck Wagon ten times to see the logical - and quite disgusting - outcome.

This game has a large number of unused graphics, mostly uncolored lineart and pencil sketches. 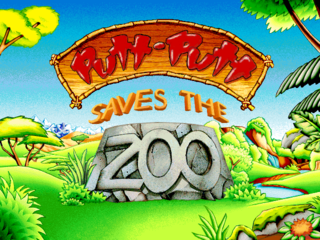 These graphics are left over from the demo version, which is mostly present in the game data. 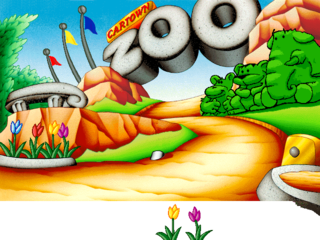 This room's background has a copy of two of the dancing flowers hidden behind the dashboard.

Rough draft for part of the "Welcome to the Zoo" sequence. The numbers in the first frame indicate the internal frame order needed to produce the animation, with the "cycle" label marking the loop point for the first part of the sequence.

Uncolored animation of Outback Al pulling out the list of missing animals... 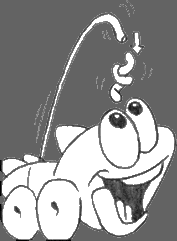 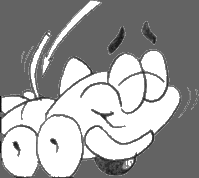 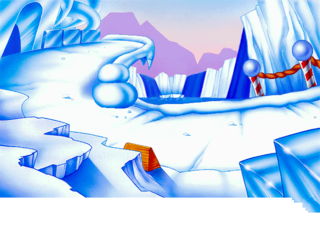 Here's an interesting one: the penguins were originally supposed to have their own fact-blabbering info kiosk! It's present in the room background, as shown, but the game covers it up by placing another graphic on top of the associated object. Only the kiosk itself is hidden, leaving behind an out-of-place shadow.

It has a complete animation set and a soundbyte for Putt-Putt to say when it's clicked (see here), but sadly no facts about penguins - just the placeholder subtitle "Blah blah blah...". What's there can be made to work by running local script 204, which is most easily accomplished using ScummVM's debugger.

The kiosk is actually visible in the room's save/load pictures, indicating it was removed fairly late in development.

Uncolored lineart of Putt-Putt seeing what you did there blinking.

Storyboard sketches of what seems to be an unrealized clickpoint involving the monkey that sits on a vine getting knocked off his perch by another monkey, then narrowly escaping from the alligator below.

What seems to be a sketch of a frog, probably for the lilypad clickpoint. 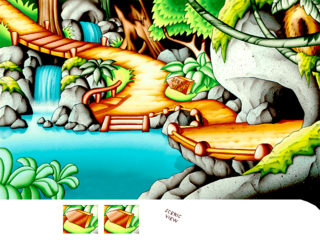 A couple of work-in-progress versions of the "SCENIC VIEW" sign are hidden behind the dashboard. Note that the hidden text is slightly rougher than what's on the sign.

A sketch from a storyboard sequence for an old version of the Thwack and Quack clickpoint. This is the only frame left in the final, but the full thing made it into the demo version.

Partially-colored animation of Putt-Putt tossing the rope to Kenya...

...and Kenya catching it. 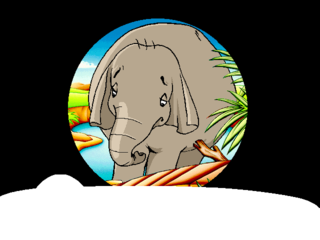 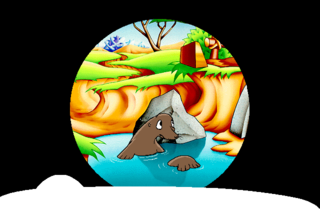 Leftover telescope pictures from the demo, which kept the dashboard visible at all times. The used images lack the placeholder at the bottom of the screen.

What would a Humongous Entertainment game be without some wild developer jokes? Obviously this was meant to be shown through the telescope, though it's probably a fairly old leftover due to using a different image format from the real telescope pictures.

For whatever reason, this frame is duplicated and stored separately. 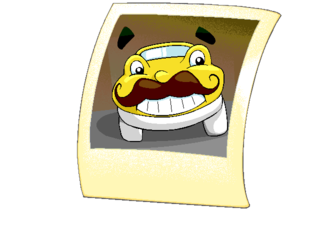 Although all the necessary graphics are present, it's impossible to take a picture of Mr. Baldini in the initial release of the game: he's always in his store unless being talked to, and using the camera on the store door does nothing. The 1999 re-release fixes this.

Putt-Putt's primary animations (moving, talking, etc.) from Putt-Putt Joins the Parade and Putt-Putt Goes to the Moon are also present in this game, probably for testing purposes. The color remap chunks used to color them correctly in those games are no longer present, so their palette is broken. The basic logic for assembling and displaying the animations is still present, and the game will default to them if the Putt-Putt actor is spawned in a room with no costumes defined for it (for example, by forcing a warp to room 21, the Animal Tag room). 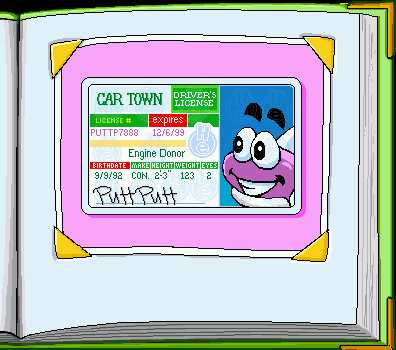 Adding ICanDrive=71595 to hegames.ini causes this image of Putt-Putt's driver's license to appear as the second-to-last picture in the credits.

The gibbons in Jungle Land normally pick from a selection of 27 rhymes, but five more (somehow even sillier than the rest) can be enabled by adding Gibbon=71595 to hegames.ini.

Some self-explanatory dialogue from the demo.

From this game onwards, Humongous titles removed the in-game option to turn on subtitles. The subtitles themselves are still present, though, and can be enabled by adding TextOn=1 to hegames.ini. This also works in most future games.

Since most people would never see the subtitles, the developers apparently stopped bothering to proofread them or keep them updated with later revisions to the script, resulting in frequent typos and occasional disparities between subtitles and dialogue.

Displayed when the game doesn't have a way to handle a particular room transition. Specifically, many rooms are configured based on the last room the player was in. If the old room isn't internally "connected" to the new room, the game doesn't know what to do and gives this error.

The PUTTZOO.HLP help file contains several unlisted pages containing information on the secret hegames.ini entries. The pages are unindexed and unreferenced, meaning the only way to see them is to specifically look them up with the "Find" function.

The demo version of the game is present almost in its entirety in the initial CD release, and can be played by force-running script 54 (scr 54 run in ScummVM's debugger). Aside from constant "No Room" errors due to the difference in room numbering between the demo and final versions, everything is fully functional.

The 1999 re-release lacks the demo title graphics, so the game crashes at the point when they should appear.

A rather sloppy re-conversion of the Dutch dub, which upgraded the game to a newer revision of the SPUTM/SCUMM engine. Though this brought a few improvements, it also introduced some nasty bugs.

The original releases use an older Humongous logo. The 1999 version updates it to the then-current logo and adds the trademark drumroll found in most other games. 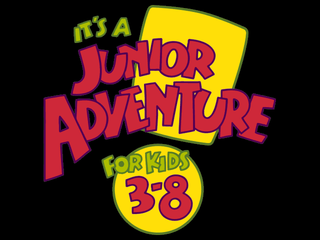 The 1999 version retroactively adds the game to the "Junior Adventure" product line. Peculiarly, the logo used is a red-on-yellow variant not seen in any previous Humongous game. It also puts the recommended age group on the exclamation mark, which wouldn't happen again until Pajama Sam 3.

The copyright dates on the title screen were updated.

All the item cursors were colorized for the 1999 version, though the monochrome versions are still used in the Windows 3.1 interpreter.

Several tracks containing English lyrics were changed in the Dutch release and carried over to the 1999 version.

Played when Sammy is rescued. The newer version cuts off strangely.

Played when Little Skeeter is rescued. The 1999 version recycles the music used when talking to Mrs. Boa.

Played when talking to Masai or her mother for the first time. 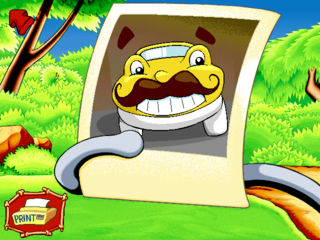