Once your series has a standard sequel and a game in space, the only sensible choice for the next entry is "game through time" … and so Putt-Putt Travels Through Time, learning all about cowboys, dinosaurs, and wizards of highly questionable historicity. He also discovers that, in a truly prescient vision of the modern gaming industry, the only video game in the era of flying cars and conveyor belt sidewalks is an odd pseudo-3D Breakout clone. (It's not actually on a cell phone, though.)

Note: This game's subtitles are riddled with typos and inconsistencies with the spoken dialogue. Anything on this page labelled "Subtitles" is copied directly from the game, even if it appears to be in error.

This game has a set of standard debugging features shared with many other Humongous games. 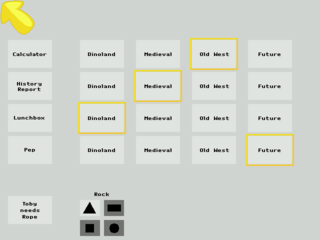 Accessible by warping to room 55, which is most easily accomplished by running the game in ScummVM and using the room command in the debugger. Clicking on the buttons alters the current game path (plot item locations and objects that are needed for puzzles). 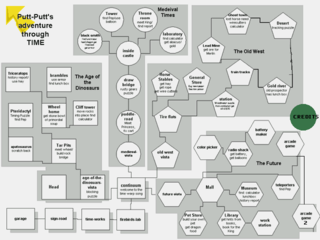 Accessible by warping to room 53. Clicking on a room warps Putt-Putt to it. 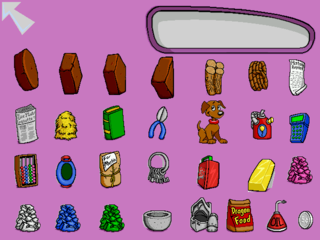 Accessible by warping to room 54. Clicking on an item puts it in the inventory. Having some items precludes having others (e.g. picking up Pep disables the balloon maker, rope, and firewood).

Adding SputmDebug=1 to the hegames.ini configuration file enables a few keyboard shortcuts allowing control over various aspects of the game.

This game doesn't have quite as many unused graphics as Putt-Putt Saves the Zoo, but there are still some interesting bits and pieces lying around.

This uncolored lineart is stored with the animations for the various creatures at the end of the desert. Its internal name is "Artists Hanging Out", so presumably these are self-caricatures by some of the animators.

Here's what it looks like on the intended background.

A few storyboards for various events snuck into the game.

Pep and the Pterodactyls

The animation data for the Time Continuum Song sequence contains quite a few duplicate frames that have labels in the margins indicating either their function or their order in the animation sequence. All of these have cleaned-up counterparts that are used in-game. The game's animation data does some less-than-straightforward things in order to place all the graphics correctly throughout the song, so the animations shown here are just mockups of how these would look if they were placed in sequence as intended.

It's worth noting that frames with unnecessarily large margins are fairly common in Humongous games. The leftover labels in this game indicate that these may have originally been used for animation notes, which were later erased without resizing the images to compensate.

A few variations on used tracks are hidden in the music data. Note that these technically can be heard in the game, because the credits are programmed to play anything stored in the HE4 file at random once the "Time Continuum" instrumental ends, but that is just a happy coincidence; these pieces listed are otherwise heard nowhere else in the game, and it's extremely unlikely the player will hear any of these anyway due to the vast array of music that is stored in the HE4 file to begin with.

Additionally, several of the music files are present in duplicate: two from the medieval era, one from the Old West, and one from the future. There are also copies of the Time Portal music (though one of them actually is used) and one of Max Wellington's songs ("The elves got into trouble...").

Putt-Putt has a few lines of unused dialogue.

Somehow, the Silly Story Maker ended up being quite the hive of unused content.

Every line of every story was recorded in the voices of both the female narrator and King Chariot, but King Chariot will never ask for the stories "The Hero", "The Scale", or "Pajama Sam". As a result, his voice clips for those stories can never be heard.

In fact, because those lines aren't used, no one ever noticed that this clip from "The Hero" was mistakenly sampled at 44100 Hz instead of 11025 Hz like the rest of the game's dialogue. If it ever played in-game, it would be four times too slow!

Here's what it sounds like at the correct sample rate.

Several unused stories are in the game data, in various stages of completion.

Recordings exist for both the female narrator and King Chariot, though only the former are presented here.

This one seems to have been mostly completed. It has voice recordings from both narrators and even some of the necessary lines for being requested by King Chariot, but there are no corresponding graphics. Note that for the third selectable word, the second choice is "martian" in the text but "gorilla" in the voice files.

As above, only the female narrator's lines are presented, though the king's are there as well.

Almost as complete as the Merlin story, although the story text seems rather rough and none of the King Chariot request dialogue exists. May have been scrapped because making "bear" one of the choosable words would have made King Chariot's request for "a story about a bear" ambiguous.

This one exists only in text form. Apparently, someone decided one blatant plug for another game was enough.

More canned Humongous ads! These are listed along with the used story titles, right after "Pajama Sam". No other resources exist for either.

One of the locations on the Room Select map is labelled "arcade game". Clicking on it does nothing, though. Instead, the button marked "arcade game 2" starts the Squoosh minigame. This suggests that at some point there were supposed to be two arcade games, or that the minigame was significantly reworked at some point and moved to another room.

Most Humongous games have inaccessible subtitles, and this one is no exception. To activate them, add TextOn=1 to hegames.ini.

The 1999 rerelease made a few changes:

Additionally, the 2002 re-release from Infogrames made several more changes:

The demo for this version added a few more changes on top of this: 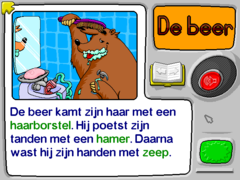 In the French and Dutch releases of the game, in the Mr. Bear story, instead of a bacon strip, one of the options is for the bear to be brushing his teeth with a hammer. This was originally to be in the US release but was removed from the game very late in development, and after Transposia, the company that produced the French and Dutch localizations, had already been sent the game's source code. Other versions of the game use the bacon.

It's not yet known exactly why this was changed, maybe they didn't want kids to break their teeth imitating it.

Many games produced after Humongous stopped allowing easy access to the subtitles have very sloppily done transcription. The text is often typo-riddled and sometimes diverges wildly from what's actually being spoken, apparently reflecting an earlier draft of the script. A few particularly noteworthy cases:

Note that "CarChat" was a radio program in Putt-Putt Saves the Zoo, where it was itself a replacement for what the subtitles identified as "CarTalk".