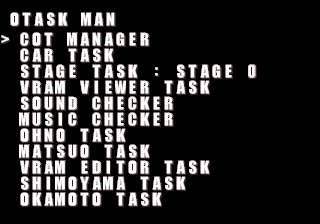 Use the following code to display the debug menu:

The following options do not do anything or will crash the game, as the functionalities were dummied out:

Choosing OKAMOTO TASK exits the menu and starts the game. 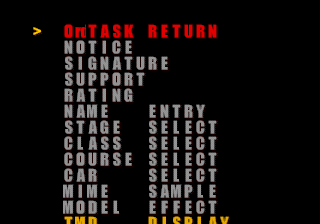 Press Square to enter any of the available menus. Only "OrdTASK RETURN", "SIGNATURE", and "SUPPORT" works, however. 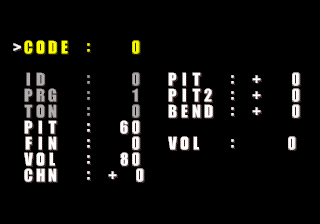 A sound test menu; press Circle or X to increase/decrease number, Square to play the SFX, and Triangle to stop.

Although the English arcade version of the game was called Go by RC, the international PlayStation releases were named the same as the Japanese release.

For the US version of the game, the "push" text in "Push START Button" prompt was capitalized. As well, the Simple 1500 version received a new, simpler title screen, but is otherwise identical to the full price Japanese release.

Unusually for an American release, the US version of the game features an anti-piracy warning reminiscent of those commonly featured in European releases at startup, although the font used is different.