The port of some strange Commodore 64 game that was originally made by this guy named William Ralph Wright, or something. 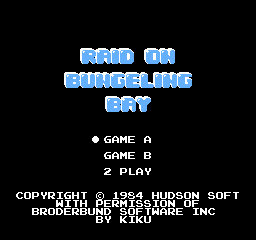 The Japanese version contains a hidden developer's message, triggered by pressing Up + B + Select while the demo gameplay is shown. The string "BY KIKU" will appear at the bottom of the screen.

"KIKU" is a pseudonym for Kikuta Masaaki (菊田昌昭), one of Hudson's programmers. Most games programmed by Masaaki have secrets or hidden messages, including Nuts & Milk, Binary Land, and Challenger.