A game "based" on Rambo: First Blood Part II. Note the quotes around "based".

Trautman slipped in possibly the first swear into an US NES game. This was changed in a later revision.

The US version still has the Japanese hiragana and katakana text. It is unused for... well... obvious reasons.

The password system was changed a little bit between versions, not only in terms of character replacement, but also in terms of input data permutations. The game uses a decipher routine machine code along with following data as a xor table to cypher and decrypt the password. Although these routines are the same between versions, the following data is a little bit different which causes different password permutation as well as partial incompatibility between passwords (some portions of the table match just fine, so not all passwords are incompatible).

One of the side effects of this is that the US version introduces a bugged password by entering all 0s, which doesn't work in the Japanese version. Surprisingly enough, first $18 bytes of the password decipher routines are different just in one byte, but only in the US version, all these bytes being XORed on each other will give you exactly $00, allowing to pass the control sum check.

The Japanese title screen contains the text "REND THE FEELINGS THE HEART WITH PAINFUL FEELINGS", which was removed in the US release. The quote was probably meant to say "Rend the feelings OF the heart with painful feelings."

The palette was altered in the US version, primarily to correct an issue where Rambo's and Co Bao's hair were green. This affects all the character portraits in the game as they all use the same palette. 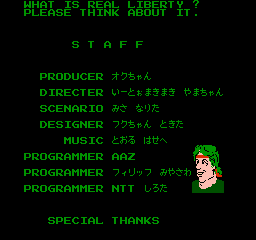 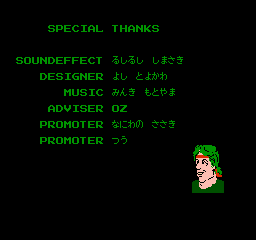 The Japanese version features a staff roll which was omitted from the US release, which simply contains a “THE END” screen. There are two staff lists; one for the main staff, and a special thanks list, complete with programming, art, and sound credits. Rambo also kindly asks you to think about what real liberty is. Aw, how cute.

Below is a translation of the text, and what it may have looked like if it was left in the US version:

Althought these symbols are present in the CHR table (tiles F5 and F6) and may be displayed at the empty room between text lines, the additional lines with extra symbols wouldn't fit into the existing ROM space, so most likely they were just dropped.