Pictures of George and Lizzie in human form, which were to appear during the screens that preceded certain levels had they followed the format of the arcade version. 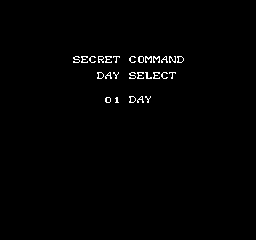 Press B + Select on Controller 1 and B on Controller 2 simultaneously at the title screen. After the mutant selection screen, a screen reading "SECRET COMMAND DAY SELECT" will follow.

Oddly, while the game has 128 levels, only the first 99 can be accessed through this menu.

There are three instances of placeholder text found among the pre-stage text, starting at 0x0B18B.