Rascal is a somewhat infamous game for the PlayStation developed by Traveller's Tales. It has been regarded by some as being the worst game on the system, a failure that Traveller's Tales founder Jon Burton attributed primarily to a decision by the publisher, Psygnosis.

Apparently, the game once used traditional 3D platformer controls similar to Super Mario 64. Seeking to cash in on the popularity of the hugely successful Tomb Raider series, however, Psygnosis decided that the game should utilize tank controls instead. The result? Many would describe the game as impossible to control, with an awkward camera to match. It was heavily panned by critics. In addition to this, Jon Burton was too busy working on another project to help save the game from the critical obscurity it now enjoys.

Despite all this, the engine by Dave Dootson is technically very impressive indeed. It includes particle effects, environment mapping, texture flickering trickery to increase colour depth, and reduced texture warping, which was a common artifact of the PlayStation hardware. On top of all that, it manages to run at 60 FPS with few frame-drops.

Entering the code "HOUSE" in the password screen will enable the in-game level select.

When enabled, the current world, level name, and room number are displayed on-screen. 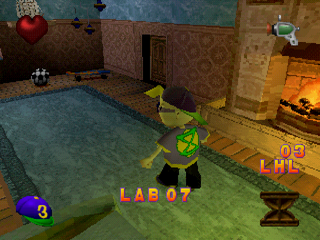