One of the very first games released by Lucasfilm Games (later known as LucasArts), which was released alongside Ballblazer. 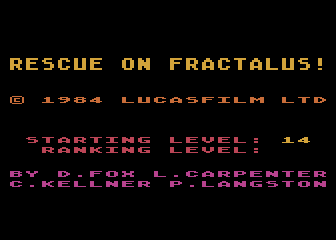 On the title screen, select Level 5 and press 5. Then, select Levels 12, 15, 16, 11, 13, and 14 in that order, while also pressing 5 after each level has been selected. The names of the game's developers will replace the score counters.