Rise of the Triad is a ludicrous, gory shooter released by Apogee and developed by Apogee's Developers of Incredible Power.

In the game's source code release, many in-game cinematic code files exist, but mostly unused. Rather, everything "cinematic" is scripted in basic text files. 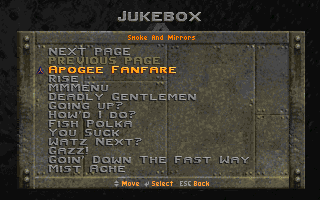 During the game, enter either DIPSTICK or \ECC. Then, enter \LEE or MAESTRO to reach the game's jukebox. 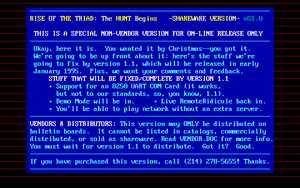 The warning that appears when the game is loaded. 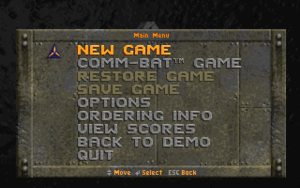 The menu with a small label header. 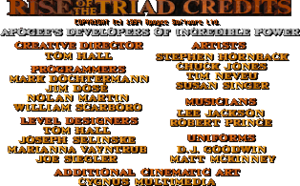 The static credits image that appears during the attract mode.

The initial, buggy v1.0 shareware release of Rise of the Triad was released Christmas 1994, and had content later dropped from the game.

The FM patches used for the Apogee fanfare were replaced with less harsher patches by Version 1.3, most likely from using the Duke Nukem 3D version of the Apogee Sound System. Most MIDIs sound radically different when played through the FM synthesizers now.

Type /GTL or GOTO during the game for the level select menu.

The game has several warp-only levels in both the shareware and registered versions of the game. Aside from cheat codes, there's no way to access these levels normally. 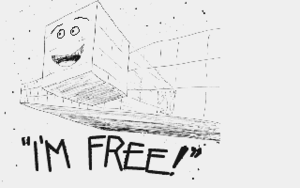 Although RoTT has plenty of cheat codes, it does detect editing saved games. Modifying the save file (thus breaking the checksum in the last four bytes) displays a message, but unlike Wolf3D, doesn't have harmful consequences:

Choosing No to this prompt will simply treat it as a failed load, similar to loading a v1.0 save in v1.3.

The source code includes the same text as found in Wolfenstein 3D anti-cheating mechanism, which was replaced by the confirmation prompt above.

The game has code for debugging on a second monochrome monitor and typing in "rott ?" does show "MONO" is supposed to enable this debugging. However, it appears to have been disabled, as entering "rott mono" doesn't seem to display anything on the second monitor. This seems to have been removed in the ROTT Source Code release. 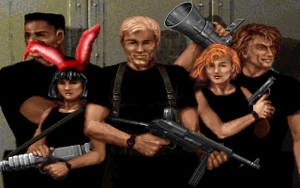 On the loading screens, on certain holidays, the playable characters don festive hats.

Rise of the Triad has many Easter eggs relating to holidays in the form of certain days triggering the loading screen to have, but one of them is an oddity. Each holiday (Christmas, July 4th, Cinco De Mayo, and Halloween) is on a fixed holiday, but Easter is based on lunar/solar cycles and is not fixed, and thus the only sure day the loading screen will show Lorelei Ni wearing the Easter Bunny ears will be the day Easter fell in 1995: April 16.

A planned feature was to have alternate versions of the various enemies, including female Overpatrol, Low Guards and Strike Teams, and alternate Lightning Guards, High Guards, and Hellfire Monks. These were cut because of memory concerns according to the official FAQ, it would require twice times the memory, and in 1994 standards it would be really high (about 8MB of memory).

Still, one frame of the enemies cut from the game remained and were mentioned towards the end of the credits/cast roll.