Risk of Rain is an action platformer with roguelike elements set on a mysterious planet.

A group of items the design and names of which are a reference to Link's usual outfit in the Legend of Zelda games.

There's also a "Hero's Scarf", the sprite of which was later re-purposed for the Hermit's Scarf, and a sprite for hero gloves but it's just a copy of the hero boots sprite.

When picked up they heal you by 35% of your max HP. However, judging by the pick up texts, their main purpose was to give the player stat boosts when low on health, but there is no actual code for handling this. Their pickup texts are as follows:

When asked about it, Hopoo said the items would have given a special effect when you collected all of them, and that they would have appeared in the uncommon item pool even though they have a purple outline as opposed to the green outline that uncommon items have.

The effect of the Hero's Scarf did make it into the game in the form of the Energy Cell.

In the files it is called "JLMG" which according to Hopoo is a reference to a website that tried to capitalize on the /agdg/ community during part of Risk of Rain's development. Its pickup text is "It seems to be doing nothing.", which is still in reference to the website.

When collected it increases your HP regeneration by 0.02, slightly better than the Mysterious Vial at 0.014.

The item was apparently available in one of the early demo versions.

There are a couple of additional unused items that don't have an object and are only sprites.

The left is a Santa hat, which is just a recolor of the Hero's Cap item mentioned above. The right is some kind of rifle, which strangely has a pink outline never seen anywhere else.

There are sprites for keycards numbered 1 to 4. Normally, you can only get 4 keycards anyways, but it's possible these may have been intended to be used on specific doors.

The heavy class is an unused class which was later reworked into the Enforcer. 2 skills are programmed for this class, 1 of which even has a name and description.

Their basic skill is called "Blast", the same name as the basic skill of the Bandit. Its description reads "Fire your shotgun. The closer you are, the more damage you do, up to 230%". It fires a bullet with half the range of the Commando's "Double Tap" ability. Unlike the shotgun wielded by the Enforcer, this skill does not pierce, and can only hit 1 enemy. The damage ranges from 0 to 230% depending on how far you are from the center of the hit enemy.

The second skill has no name or description. This may have been reworked into the "Crowd Control" skill of the Enforcer, though rather than firing a projectile this skill just immediately detonates next to the player and has smaller range. The explosion deals 130% damage and stuns.

For some reason, the class has the display name "bob". Likely just placeholder.

The pyro class is an unused class which plays very different from any other class in the game. 3 of their skills are programmed.

The first 2 skills of the pyro are very similar. They can both be fired constantly by holding the skill key and both shoot a stream of fire in front of the player. Surprisingly, the fire does not pierce. The basic attack has a random range of 50 to 60 pixels, and the second skill has a range of 40. The first skill does 40% damage each hit, half as much as the second skill which does 80%.

However, the first 2 skills are different in more ways than just range and damage. The second skill applies a DoT, very similar to that of Acrid's first skill, dealing 120% damage over the course of 2.5 seconds. It also fills the pyro's heat meter by 15%, the skill can only be used if the heat meter is 85% full or less. The meter depletes over time. If the heat meter gets completely filled, you must wait until it fully depletes again to be able to use the second skill.

The third skill turns the fire shot by the other skills green for 3 seconds. When the fire is green, it gets bonus lifesteal, double the effect of the Leeching Seed.

The cyborg class is the newest class here, though it only has a single skill. The class was probably replaced with the Mercenary, considering its position in game files and slight visual similarity.

Their basic attack fires a plasma ball which can be charged similar to the "Drill Charge" skill of the Miner. The projectile gets bigger with the amount of time it was charged, and can pierce through enemies depending on charge time. The attack deals 160% damage. Although 2 sprites do exist for the projectile, it uses neither. Instead, the projectile is drawn through code and looks most similar to the lightning ball attack of the Scavenger.

The character also has 2 unused animations that look like punching.

Their third attack is just the Commando's roll, unedited. However, they do have a sprite for a third skill, but it's just 2 copies of their jump sprite.

Interestingly, the character they're the closest to is HAN-D. Not much seems to have been carried over to the final CHEF.

At one point, Huntress was apparently going to be able to switch between a dark form and a normal form. Though there's nothing left of the dark form's abilities, the Huntress does still have code for a second sprite set.

Although we don't know what their abilities were, unlike every other unused character this one does have skill icons. The first 2 both seem like straight attacks like the normal huntress does. This is backed up by the fact that there are copies of the Huntress's first 2 skill animations for Huntress 2, though only the first is recolored to match the grey palette. The third skill could be stacked, like HAN-D's drones or Engineer's mines, up to 2. The fourth skill icon has the colors of the normal Huntress on it, so it was likely used to switch back. The final icon is just the default "no icon" sprite.

An unused variant of the hive cluster. Unlike every other level variant in the game, this is a completely different level than the one it's a variant of.

The left side of the map is missing collision, suggesting that it was scrapped fairly quickly.

The spike graphics seen on the bottom platform are never used anywhere else in the game.

Like the other unused maps listed here, this map simply uses the placeholder name "acid" as opposed to the actual final name. 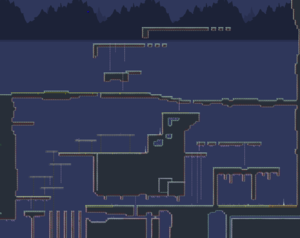 An early variant of the Sunken Tombs.

It has platforms at the top of the map similar to one of the actual used variants, but these platforms are made of the ground rather than metal. 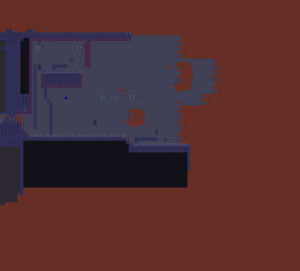 Seems to be an old version of the final level, however the graphics appear to have been rearranged so it looks wrong.

Nothing like the final version of the map, doesn't look like it was built with normal gameplay in mind but there's not much to go off of. 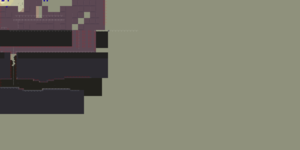 Very much the same deal as above, but this looks like an early version of Temple of The Elders.

The underground part uses tiles from Desolate Forest, but part of the tileset for the upper part appear to have been removed, or tiles were never placed there in the first place.

A copy of the final level, but all the spawn points are removed and a new one is placed right in the boss room. Was probably used to test the final boss but there are no other noticeable changes.

A strange unused object, presumably to scare away / for the enjoyment of modders.

Its sprite is of a laughing golem and the top of its code contains the comment "you shouldnt be here".

When spawned, the object has a 90% chance to just remove itself. If it doesn't, then it will wait until you've had it on screen for 1 second, and then wait another second. At this point it will display the text "You shouldn't be here". After another 2 seconds it will open your CD drive and stick around for an extra second before destroying itself.

The object was removed in later versions likely due to the removal of Gamemaker's cd_open function.

There's an interesting unused text box of providence talking to the player which would be used at the start of the final battle. It reveals some interesting details of the story, however it has been confirmed by Hopoo that what Providence says here is no longer canon.

A quite fancy looking platform, appears to match Temple of the Elders best.

When you approach the center, "Press [interact key] to activate" appears. Activating the platform would make it begin to rise, make the camera shake, and make enemies spawn much more quickly. When the platform collides with another block or the player dies, the platform stops moving and enemies begin to spawn at their normal rate again.

Unfortunately, support for moving platforms was never completed so it does not function properly.

A giant sword which when spawned will flash and float in place for 2 seconds, after which it will begin to fall at an accelerating rate.

Seems to have been intended as part of an unfinished final boss attack, due to file name and design matching that of the final boss.

As it is very unfinished, it doesn't actually do anything like hurting the player, and never despawns itself.