In Roll Away, you assume the role of a beach ball on a quest for fruit while avoiding the elements and various pointy objects. Notably one of the earlier games to make use of the DualShock rumble, allowing you to feel the ground break under your poor ball. 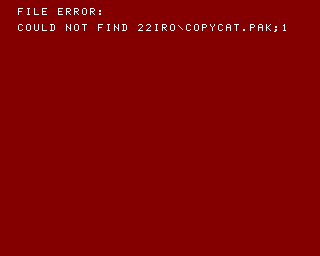 If the game can't load a file from the CD, this error screen appears.

Adding the exit to the unreachable block is the only level difference between the European version and the Hidden Palace Jun 3 US Prototype.

Levels in "The Final" contain no fruit, or at least they shouldn't. This rogue apple on level 3 was subsequently removed in the NTSC versions rendering the blue transporter pointless.

The Japanese version added a completion percentage for picking up point items to each level - most changes in this section are cleanup to ensure 100% pickups in all levels is achieveable.

For instance, an unreachable coin was removed from Level 102.

The solid ice block on Level 131 had a face 'un-iced' and replaced by a force arrow. Bizarrely, this new force arrow is unreachable. An unreachable coin on the same block was also removed.

A gem on Level 133 was made slightly less 'certain death' by plonking it on a rather more benign tile.

The coins on the corners of the bottom level on Bonus Level 4 were removed. The US level has the option of collecting those coins or collecting the gems on the inside face of the cubes. Removal of the coins means there is no longer an either/or choice and 100% collection completion is possible.

Bonus Level 16 was redesigned to remove the 'gem surrounded by spike traps' section.

The four solid blocks at the ends of the cross on Bonus Level 17 had their lethagy pills and coins removed, replaced by a single gem on each.

Bonus Level 26 had three gems removed. If you thought that was because they were inaccessible, you'd be correct.

Coins? Deletion? Say it ain't so Bonus Level 28! Unfortunately, it is.

Another inaccesible coin was removed from the underside of the exit block on Hidden Level 2.

Breaking news! Hidden Level 6 kills accessible coin. Also taken out in the hit were two moving platforms. Witnesses state that these platforms made it easier to get to and from the coin, but weren't the only way.

And finally, that pesky unvisitable Hidden Level 9 had a fruit removed, not that anybody could legitimately notice.

The lethargy pills are gray and white in the Japanese version. They're red and yellow in the others.

The Exit square icon in the Japanese version was changed from an X to 出口.

Pressing Select in the Japanese version toggles the camera from its fixed position behind the ball to being freely rotated around the level, like a controllable version of the pause camera. On the other versions, this camera has to be enabled and disabled via a GameShark code. 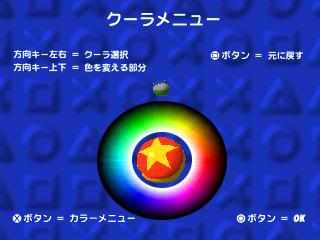 The Japanese version also allows you to pick which ball to use and to customise its colors between worlds. This feature isn't available in the US and European versions.

The Japanese version adds a Lesson option to the main menu. This takes you to a training/test level which contains all of the obstacles and mechanics found in the game. This level is on the disc, but inaccessible in the other regions without GameShark codes.

Each region not only received its own game name, but its own ending FMV too. Again, the Japanese version went above and beyond by having not one, but three ending FMVs. These are notable for being produced with the help of Polyphony Digital - yes, that Polyphony Digital.

The final Japanese FMV is for clearing "The Final". Other regions have no FMV for this event.