The first Rugrats game. The Rugrats are on a quest to find Reptar (particularly Tommy's Reptar puzzle). You find pieces from random places by playing minigames. 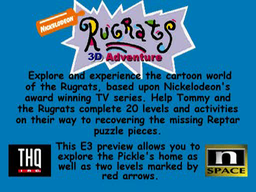 E3SCR512.BS contains a leftover screen from the E3 demo version. It seems to be from a fairly early build, as the game is just called "Rugrats 3D Adventure" at this point. 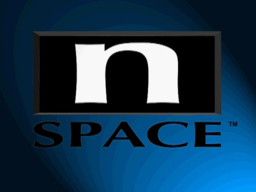 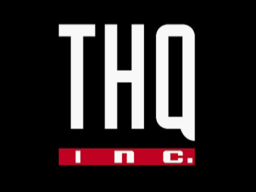 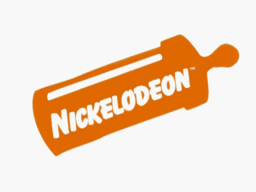 The game has animated logos for n-Space, THQ, and Nickelodeon. These still image logos differ from the final designs. Interestingly, the Nickelodeon logo was recycled and used for the second PlayStation game, Studio Tour.

The save icon was meant to be animated.

DATA\SOUND\SEPS\INTRO.SEQ is a peculiar sequence that does not sound like something from Rugrats, and may be leftover from something else. It also has a duplicate called INTRO.OLD.

BRAZIL.SEP contains two unused music sequences, neither of which have the proper sample data, so will be presented as MIDI files.

A short rendition of Stayin' Alive by The Bee Gees.

A rendition of Hungarian Rhapsody No. 2 by Franz Liszt.

In DATA\SOUND\XA\DB08.ISF is where all the game's speech is. In this take, you can hear Cheryl Chase read the take number 593 at the beginning. This does not play in-game.

The Return of Mr. Friend 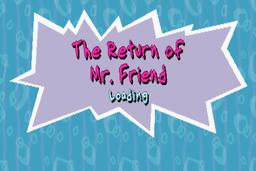 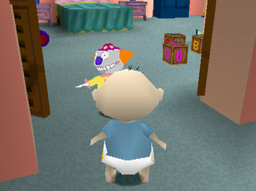 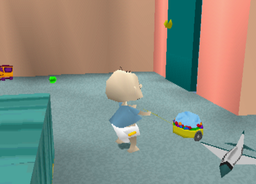 An unused level is in the game's coding, which is a sequel to The Mysterious Mr. Friend. Upon defeating Mr. Friend, he falls apart and disappears, but no cutscene plays, so you're stuck until you quit to the main menu. There are also two unused items in here; a daytime version of Tommy's Airplane, which you can see a dark version of in "Let There Be Light", and a push-ball-popper toy. Both items can be held and carried like normal items.

An unused level titled "Be Bad" is in the game's coding (level ID 19). However, if you try to load it, the game crashes. The level ID takes place between "Egg Hunt" and "No More Cookies", both of which were minigames, which implies "Be Bad" was also going to be a minigame stage, versus a full level.

In DATA/OPEN are duplicates of each video, ending with a B. They are all just a black and grey square for 7 seconds.

In one of the level folders (DB19) is a file titled "Q.DAT". Below are the contents.