SSX3 is the sequel to the previous game. Also known for the one game Sims play all the time in The Sims 2.

This video shows off unused Peak Boss cutscenes. There were other Peak Bosses planned to battle against you. They are Moby, Allegra, Viggo and Kaori. 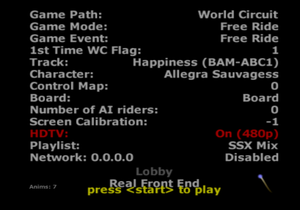 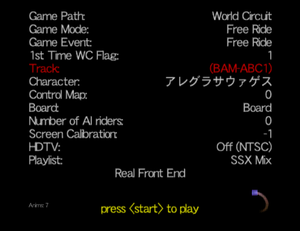 A quick start menu allowing you to change characters, music tracks, and courses, among other options can be re-enabled with the codes below. You can either have this menu enabled before the opening logos, or after the Start screen. Both can also be enabled.

Present among the Debug Quick Start Menu text is text for a debug track, simply titled Debug Track. This is no longer among the debug menu anymore. This would have been course ID 0x16, however it is no longer present on the disc.