This is a sub-page of SaGa Frontier.

Like many Japanese games of its era, SaGa Frontier received a less-than-perfect English translation for its international release. Some translation choices (occasionally, outright errors) hid content and flavor from non-Japanese players. In many cases they were dictated by cultural differences and technical limits, but in others they appear inexplicable. In a few cases, the mistakes come all the way from the original Japanese...

Sometimes, SaGa Frontier was a little too flavorful to make sense to an international audience, and translators had to flatten it somewhat. Occasionally, the references were probably too obscure even for the translators.

Sometimes, Japanese developers give things names that make English translators cringe. Occasionally, it's the other way around...

And Now You Know!

Things that don't make sense or give you pause in SaGa Frontier can often be blamed on some puzzling translation choices. In many cases, better translations would've removed some of the guesswork the game is notorious for.

In T260G's scenario, the player has to find a robot mouse that got lost in King Sei's tomb and bring it back to Nakajima Robotics, who need it to activate their newest Mec (and recruitable character) ZEKE. Problem is, their explanation of why this is necessary, and why the robot mouse was in the tomb, doesn't make any sense.

Nakajima: We sent a robot mouse to Trinity’s restricted area to get some data. But after it got there, we lost its signal somewhere in Sei’s tomb.

What does Sei's tomb have to do with Trinity? And why do they need data stolen from competitor Trinity to move one of their own Mecs? This is what Nakajima was actually meant to say (emphasis added):

Nakajima: It’s kind of a long story. Before Trinity’s on-site inspection, we stored our important data in a robot mouse and sent it into Sei’s Tomb. No one would be able to find it there. After the inspection was over, we tried to call the mouse back, but it didn’t return.

So the real story is: shadowy military-industrial conglomerate Trinity accuses minor competitor Nakajima Robotics of stealing their designs. Nakajima is forced to agree to an on-site inspection, but first they store vital data on a small robot and hide it. Trinity inspectors seize storage media for an indefinite time, hoping to force Nakajima Robotics to shut down, but the plucky little factory can still rely on their hidden backup. Problem is, the backup doesn't answer to the recall command, and is stuck somewhere in monster-infested Sei's tomb. They'd use their heavily-armed ZEKE Mec to retrieve it... but the only copy of its operating system is stored on the lost backup.

And now you know!

In Red's scenario, if you meet BlackX Emperor Berva with IRPO agent Doll in your party, she'll officially put the crime boss under arrest:

Doll: Berva, you are under arrest for violating penal code 20348.

This is not a bad line of dialogue, nor does it really matter (Berva won't let itself be taken alive either way), but it originally said something slightly different:

Doll: Laugh all you want. Region’s Most Wanted Criminal 20348, BlackX leader Berva, you are under arrest.

The Strange Case of King Sei 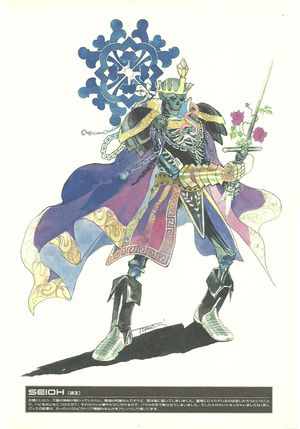 "I thought he would be lonely in the ancient graveyard, so I gave him a snake companion. And as if he wasn’t flashy enough, I added roses, too. Then he ended up looking charming (laugh)"

Sometimes, translation errors happen before translation and end up being baked into the game.

To unlock the funerary chamber of Sei, ancient king of Shrike, the player has to gather his three treasures from shrines scattered around the tomb: the Murakumo sword, the Mizukagami mirror-shield, and the Magatama bead pendant. So why does an ancient king associated with the Imperial Regalia of Japan look like an undead European knight, who references the Knights of the Round Table even as he cuts down the player's party with his very un-European Kusanagi sword?

Interviewed for The Essence of SaGa Frontier, hired artist Tomomi Kobayashi readily admits to her mistake:

He’s supposed to be from ancient Japan, especially with the tomb and three sacred treasures, but I accidentally made him look European.

Square 2nd Division clearly loved the "mistake" (it does kick ass), so much that they didn't ask for a redesign and modeled King Sei's in-game appearance after the concept art (pictured right), ignoring the inconsistency.

Some translations are mind-boggling in how bad they were.