This is a sub-page of SaGa Frontier.

In a game where a little of everything else was left unused, should it surprise anyone that there are numerous unused areas as well? More accurately, these are rooms that should have been in assorted existing areas, but for whatever reason were not.

Room ID: 0216
Luminous is a very tiny region, so it isn't terribly surprising that several parts of it were cut. It's not clear quite where this hallway would have fit, however; it's possible it was originally the main hallway, before the area was redesigned. The shining doorway in the center was supposed to lead you to the unused convenient store map (also removed from the final version). The sheer number of paths, lacking exit data, serves only to introduce more questions than this area answers... 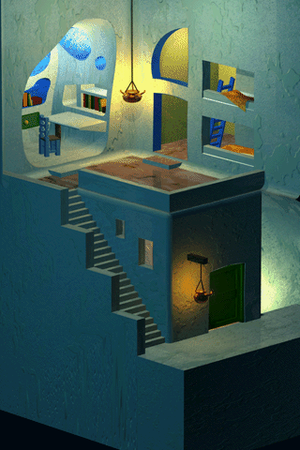 A room with a view!

Room ID: 021C
Another unused room within Luminous, the colorful design and bunkbeds appear to suggest this is a child's bedroom. The green door doesn't appear to lead anywhere, although very bizarrely, if you exit to the right, you'll emerge from the staircase behind the man at the port! It seems that Luminous was intended to be a full-fledged town at some point, rather than just a series of caves. 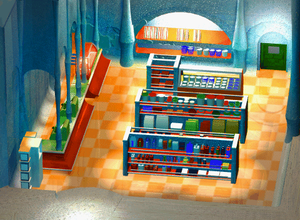 Care to buy something?

Room ID: 021E
A cheerful and colorful grocery store. Interestingly, this room has exit data in place: The south exit leads just outside of the Light Magic shop, while the upper green door leads to the magic shop itself. This room was obviously intended to fit between them. It looks entirely out of place in Luminous, though, so it's not terribly surprising it was cut. 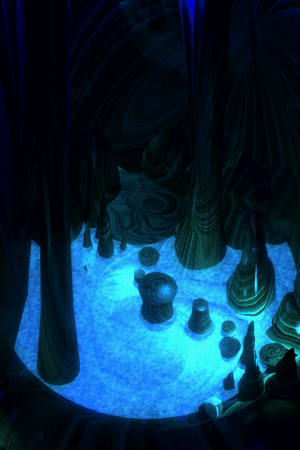 Step into the darkness...

Room ID: 021A
A dark cave mouth, and a small lake with stepping stones, which may have once served as the entrance to the shadow region, Omble. The stepping stones function, but there's no additional exit data. You're merely teleported to the region in-game, but there is a very noticeable cave entrance behind the lady who sends you there, which even has exit data (see below). 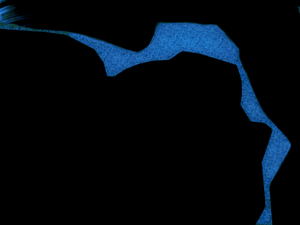 Room ID: 0219
A straight, narrow tunnel. The north exit connects to the cave entrance above, while the south leads to another small path, below. Presumably part of the lost trail to Omble. 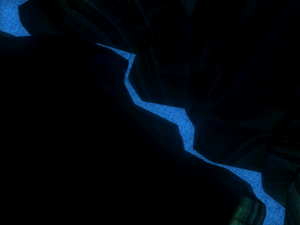 Room ID: 0218
A similar, but different, narrow trail. As mentioned above, the north exit connects to the second passage, but the south exit connects to the dark cave, where you normally buy Shadow Magic. Attempting to return this way, however, leads to a black screen. It appears getting to Omble once involved a lot of pointless filler; it's probably for the best that most of this was cut. 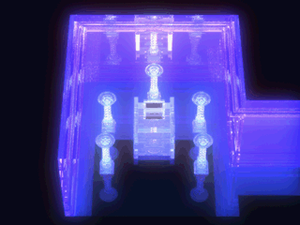 Room ID: 0330
And on the other end of the magic spectrum, is this small room in the Luminous Labyrinth. It greatly resembles the mysterious side chamber next to the light beam puzzle room, suggesting the two were used for the same purpose... whatever that may have been. Why one was cut but the other wasn't is another mystery. Attempting to exit the room sends you to an empty black screen.

Normally, the only parts of the Shingrow Palace fighting arena you're allowed to enter (outside of cutscenes/battles in Red and Emelia's chapters) are the seating areas. There are a pair of staircases on either side of the room connecting to the arena itself, but since you can't actually enter the main fighting ring there's normally no way to reach them. Via the walk-through-walls GameShark code, these can be accessed, and surprisingly enough, contain exit data to some entirely unused areas! 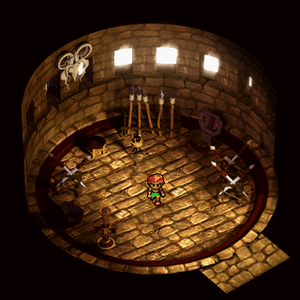 Room ID: 0163
Exiting to the left takes you to this small circular room with a Shingrow native (who simply says "Hey!" if spoken to), two opened and empty treasure chests, and a lot of decorative weaponry inside. In all likelihood, you were meant to be placed in this room just before your fights in the tournament, but this never ended up happening. 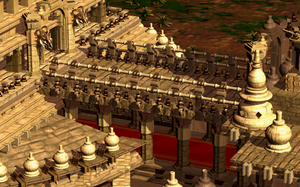 What a magnificent castle!

Room ID: 015C
While this map itself is not actually unused, you're normally limited to the carpeted hallway below. The right staircase in the arena, however, leads to the bridge above said hallway, which is normally inaccessible. There's another door across the bridge to the right. 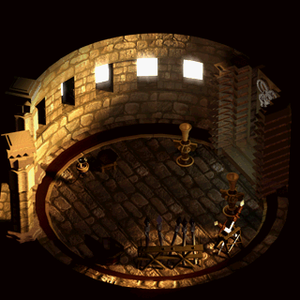 Room ID: 0164
It leads to another small circular "waiting room", this time without even an NPC present. The suspicious-looking wall hides a secret passage, but it appears to be a one-way trip and cannot be opened from this side. 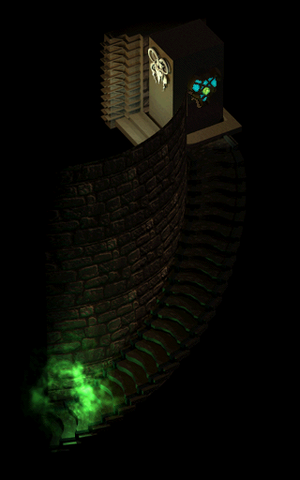 Room ID: 0165
Behind the suspicious wall is a staircase that leads to Berva's underground base, but in a small, enclosed area that's normally entirely inaccessible. It really looks like all this should be accessible, but for whatever reason it seems the path leading to these areas was removed at some point in development. 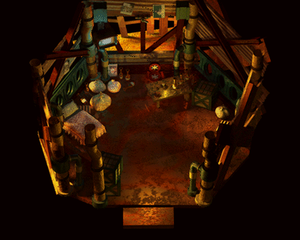 A small house present with the other maps in Scrap. Exiting leads to a nondescript spot in the Caballero Factory, and given that and the similar design, it's likely where this was intended to be used.

Room IDs: 0149 (unused variation), 014A (room used in-game)
A small elevator shaft. While this screen is technically used in-game, the elevator in the middle is always in an "up" position. The exits both lead to the same places they would normally. 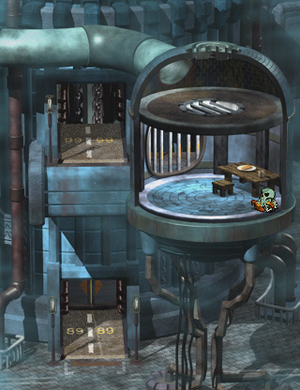 Don't bother getting up.

Room ID: 014B
This tiny prison cell can be seen normally, but although you're only able to walk around in the small enclosed area just above the cell, the map is actually a fair bit larger, as can be seen via a walk-through-walls code. It's anyone's guess what all this was for, but whatever the reason is, it's there. Also of note: that decorative skeleton is actually a fully-programmed undead monster. 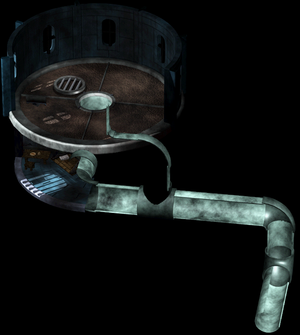 Room ID: 00DC
Yet another map that can be visited in-game, yet contains a whole heck of a lot more than you'll ever normally be able to see. The large open room and the prison cell below it are never used for anything, and given their somewhat graphically-glitchy appearance, they were probably scrapped early and forgotten about. It's possible that this was once going to be where Emelia's chapter started, but this was moved elsewhere in Despair. Also note that using the code above is the only way to see these rooms; the game hides them if this room is entered normally. 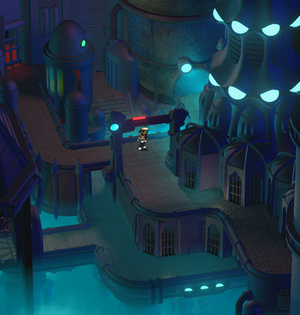 Despair is a very not-happy place.

Room ID: 001C
As mentioned elsewhere, you can teleport to an unused area via the "full RegionMap" GameShark code. It appears to be a part of the Despair prison, but is entirely inactive. None of the many doors open or lead anywhere, and while the warden is present, he has no dialogue; technically, some exists, but cannot be seen without hacking. There is also no music here. 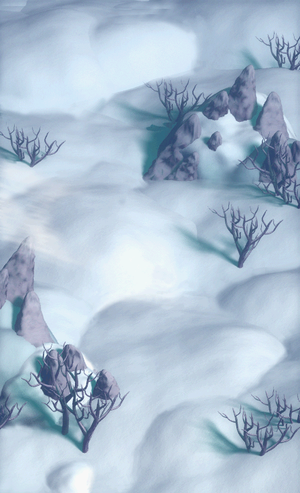 Mixed in with the other Mosperiburg Mountain maps is this expansive snowfield. This map was supposed to appear in Asellus' scenario when she jumped into Kurenai to escape from Facinaturu. It's also seen in Riki's ending, but there's a lot more to it than what's actually visible. 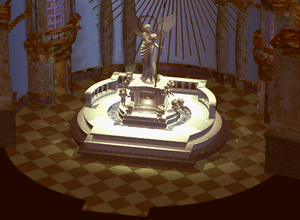 Room ID: 00A3
A large room containing an elaborate statue with the word "MORI" carved into its base. This area looks like part of the Magic Academy from Blue's intro sequence, although how it would have been used is unknown. "Mori" is short for "Memento Mori", a Latin phrase meaning, basically, "Remember your mortality". Seems these are graves, although what purpose they would have served is unknown. 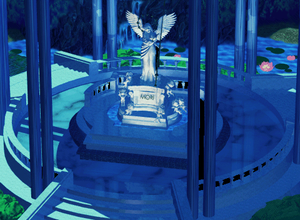 Room ID: 00C8
The same "MORI" statue as seen above, tinted blue, and in an outdoor plaza with a lake visible in the background. This resembles something seen in the promo movie included with Tobal No. 1, but again, how it could have been used is a mystery.

The MORI Statue... IN SPACE!

Room ID: 031D
Yet another "MORI" statue, and hands-down the oddest of the three. This one is much, much larger than the other two, and appears to be floating in space, inside a large bubble. What were these strange statues going to be used for? 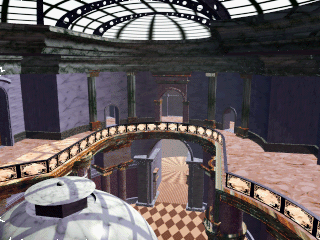 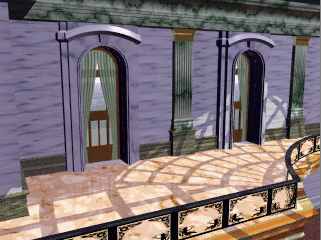 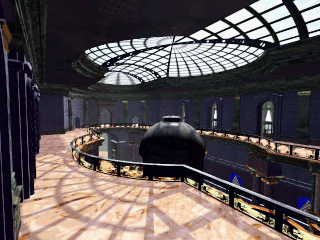 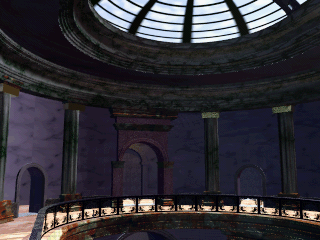 Room ID: 0033
Four static one-screen balcony maps, appearing to show the Magic Academy. It's not entirely clear whether these were intended for cutscenes, or were actually meant to be explored at some point. According to Essence of SaGa Frontier, it was originally intended to be the newborn infant treatment facility. 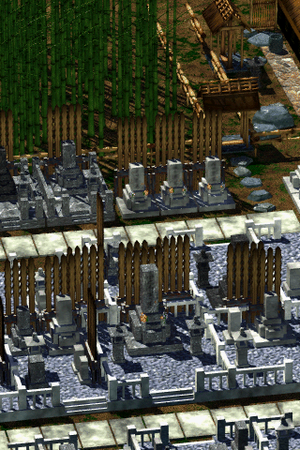 Room ID: 0349
The graveyard from Red's ending sequence. Only the lower sidewalk and row of graves can be seen in-game, but there's actually quite a bit more, including a second row of graves, and a unique bamboo forest and small shrine that are not seen anywhere else in the game. 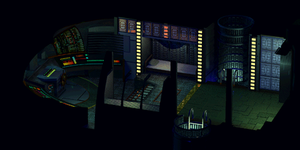 Warp factor to max, or some other sci-fi jargon.

Room ID: 0369
The bridge of an unknown ship that most resembles Mondo's.

Room IDs: 0257 (day), 027A (evening), 0258 (night)
A large, futuristic train depot, with three different maps depicting it during the day, during the evening, and at night. It's never used, but that the developers bothered including it three times suggest that it must have been intended to serve some fairly important purpose. Given its high-tech appearance and the maps' relative position in the data, it's pretty safe to assume this was meant to be used in Manhattan, perhaps as a way to transport between the city, Trinity Base, Tartaros, and Despair.