Scooby Doo! Mystery Mayhem is a puzzle game where you capture ghosts in a book called the Tome of Doom.

The executable has an unused font named font_debug_0, which was intended to be used for a debug menu during development.

The Milton Brothers were supposed to appear in Episode 2, but were ultimately cut out. Several voices are left in the game's VAG files though.

This music was going to be in one of the episodes or mini games for going through the crypt, but it was left out of the game and remains unused in the Stream folder. 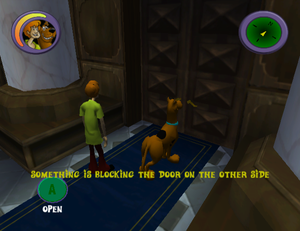 "Something is blocking the door from the otherside". 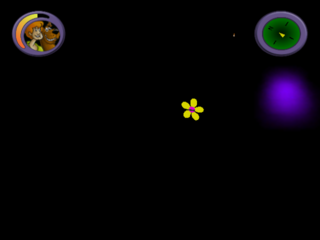 If the player takes the camera out of bounds while in the pause menu, you can see a tiny flower floating, but it is very mysterious why it is there.

A scene of Shaggy showering (in reference to the show's season 1 opening), meant for episode 1.

Scooby Running with a Barrier

A scene of Scooby running into a mummy while in a barrel, meant for episode 2. 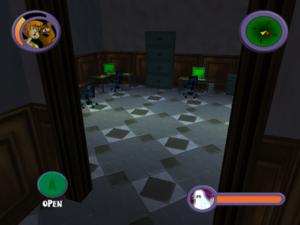 An unused room exists in the main library and Scooby and Shaggy. If you open it, it will say the door is locked and there are no handles for the door. There is a desk in there, as well as computers, keyboards and chairs.

This room is usually locked and inaccessible.

While this likely would have changed some internal settings, it's unknown if it still does.