The SNES Scooby-Doo Mystery is a platforming adventure game based on the popular Hanna-Barbera franchise. You take control of Shaggy and Scooby and help them solve mysteries by finding items and clues.

Not to be confused with the point-and-click Genesis game of the same name. 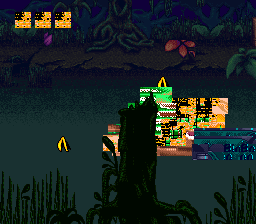 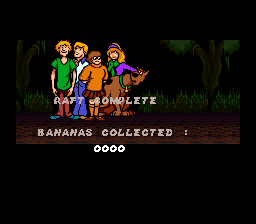 A mini-game that was intended to be played after the level 3 intro cutscene. Use Game Genie code DDD3-6767 or patch the ROM at 0x000EEE to value 0x00, then start from level 3 either via password or after level 2.

Notably, this game uses the regular level engine and has a lot of corresponding level map and object data. You move the raft with the D-Pad, and X or Y to use flippers. There are portals leading to other sections of the level. You can collect "bananas" and get stuck on the obstacles until all lives are out. The level is finished with the mini-game like screen with scores calculation.

There are some issues: 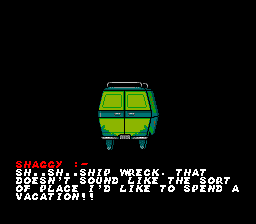 There are some unreferenced cutscene routines, most of which are copy-pasted with dummy or incorrect graphics, but at least one has an otherwise unused bus picture from the back side. It seems they wanted some outro cutscenes at some point, but they dropped them very early into development. To see it in action, patch ROM location 0x27A8 with 0x90.

In a Message data resources there are a lot of unused or unreferenced dialogues for various characters.

At 0x16C745, the missing line for Scooby as a very first phrase when entering the ship.

At 0x16C891, same dialogue ends with Freddy's: "NO NEED TO BE SCARED,/GUYS! IT'S ONLY AN/EMPTY WRECK. THOSE..." и "...NEWSPAPER STORIES/ARE JUST HOGWASH./THERE AREN'T ANY/GHOSTLY PIRATES!", but there is another line missing here, but used instead in the level 1 intro cutscene.

At 0x16CD60, this message located next to the description of item "SCRAP OF PAPER" and it seems were intended to another item inside it as it were with "PIRATE TEDDY", but there is no other KEYS there in the final version.

At 0x16CDC9, there are two descriptions for the item "POWER GENERATOR" used in levels 1 and 3. Only one is used: "HEY GUYS, IT'S/ A GENERATOR!" at 0x16820F, since the corresponding item object and index is the same for both levels. The message is just a little bit different though.

At 0x16CE78, one more unused item description out of two, the used one is: "YOU FOUND SOME MATCHES/GUYS. YOU TWO BETTER/BE CAREFUL WITH THOSE!" at 0x16B247. Less difference than the previous one.

At 0x16CEBD, an unused item description meant for Shaggy, instead of Velma. Usually, such type of messages are used for locked items intended to be used in a trap later. They aren't usable until then. There are no unusable keys for traps in the final version. 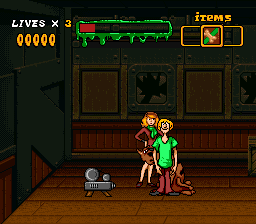 At 0x16CEFF is a missing unused item description. This is the intended last piece of the mystery, checked after "SCRAP OF PAPER". A corresponding item still may be used in the game (item index 0x46, use Game Genie code 3A95-07D9 or patch ROM at 0x0A557C to value 0xEC to replace "TREASURE CHEST" near Daphne with it). Anyway, the item's description is not implemented at all.

At 0x16D1F9, one of the messages out of the block for the "POWER GENERATOR" and "POWER CABLE" items is not used. This may be used for any items put on the floor to use for something, but impossible to get back like the two forementioned items. But both of them are not left on the floor after being used, they're wiped off of the screen instead and can't be used another time.

At 0x16D3BB, once again "PROJECTOR" item leftovers this time for Velma's "MISTERY UPDATE GUYS" message. Intended to be displayed after the "SCRAP OF PAPER" line, but instead they just copied the same line for "PAPER" in scripts.

At 0x16D565, when you make a Pirate Trap, you need to bring it to Freddy first "TROLLEY", then "RUG" and then "PIRATE TEDDY". The script logic does not check the current item, instead it checks item presence in the inventory. No matter what you bring him first he will take only the needed item. If there is no such item in the inventory he will tell you the corresponding line. However, the "PIRATE TEDDY" item cannot be lost or thrown at this point. So this message for this case when you still do not have "TEDDY" never appears.

At 0x16DD21, either for Velma or Freddy there is an unused action line:

At 0x16DE24, it seems Daphne must have been more talkative at some point during development. There are plenty of her message lines unused and unreferenced in the game's resources:

At 0х16E3A9, finally, the very last line after the "Z-ZZ-Z" message for the electric door, completely unknown for what:

At 0x16B680, there are two KEY items with indexes 0x15 and 0x16, both share the same script for item description messages with text at 0x1681C0: "IT'S AN OLD KEY, TRY/TO FIND WHERE IT FITS". However, there is another script for an item description with another message which was presumably intended for KEY with index 0x16 but it is never used.

At 0x16B814, in this level the Trap construction does not involve Freddy, all items must be placed with Shaggy and used. However, there are sets of messages for Freddy accepting items as in other stages, they aren't used at all:

At 0x16BA07, also in this level there is no need to go and lure him to the trap, the Evil Clown is already walking around said trap. So all these trap specific messages are not used either:

At 0x16BEC7, here is an unused line about WELDING GEAR as a separate item in a message block used by Freddy. But he only gets both items at once and speaks another message at 0x6C071: "HEY GUYS, THAT WELDING/GEAR WILL ALLOW US TO/BREAK THE LOCK!!!". It seems, this line may belong to Velma, but she is not at this location at that time. Worth nothing, but script for Freddy in this location uses message subroutine of Velma. If you talk to him without WELDING GEAR he will speak Velma's line "MYSTERY UPDATE GUYS!".

At 0x16BFF1, as an evidence of previous implication, the BIG TOP entrance door as any other locked doors has a corresponding script which is set inside main Velma script and must display a message spoken by Velma herself. However, you never see this message even if you get close to that door because Velma is not in this location. Freddy says her other lines instead!

At 0x16C0EF, this line is located between two lines for Freddy and Velma and may belong either to them or to Daphne but is never used by anyone.

At 0x16C1A4, once again, after a single spoken message by Daphne there are a whole bunch of other messages for additional locations presumably for her but are never used.

At 0x16C41D, between CLOWN NOSE and CLOWN COSTUME clues there is a JANITOR'S LETTER clue that must be obtained. The corresponding item index is 0x27 (sniff it near SHOT-THE-DUCK boot). It has a description message and checked by most of the script logic as a valid item. But Velma's script for "MYSTERY UPDATE..." after CLOWN NOSE checks for item index 0x23, which is not present on the level at all and has no description script. Since there is no possible way to obtain such item, two "MISTERY UPDATE..." messages scripts never gets its branch executed: for the JANITOR'S LETTER ITSELF and for CLOWN COSTUME, final one. Also worth noting, but item 0x27 has the same item picture as LOCAL NEWSPAPER for some reason, but if you try to hack item 0x23 into your inventory (in RAM put 0x23 at 0x7EFF14-0x7EFF24 above any other item value present there) it will look like a sheet of paper, more like some LETTER.

At 0x16C54C, at the end of other used CLOWN'S messages there is one unused, maybe intended to be spoken in a scenario when you need to lure him into the trap which is not used here.

At 0x169FB8, presumably, a description for a locked item intended to be used later for building a trap. In the final version, to refill the power GENERATOR you just need to find a half empty GAS BARREL, and this item is not locked. It seems at some point in development, the final trap quest for this level was a little bit different.

At 0x16A229, an item with index 0x56 is not used in this game, however, it has an object and item icon graphics as well as item description script with a corresponding text. Since the item is never used, the following message is also unused.

At 0x16A467, some more messages corresponding to an unused item quest for a trap involving refilling the GENERATOR:

At 0x16A63A, when Freddy is waiting for the items to BLOW the LEAVES, there are three options: first he waits the FAN, then gets the GENERATOR and starts to BLOW the LEAVES. The third option is for the case when Freddy is still at that door but leaves are blown. However, the script that actually BLOWS the leaves switches immediately Freddy's script to a walk to the next location, the third option has no chance to be activated at all then, so the message ends being unused as a result.

At 0x16A6F9, as against any other levels, this one has an oddity: Velma does not speak "MISTERY UPDATE GUYS!" messages. All she does is inform you only about items with dedicated descriptions. So, when you give her a CLUE you just see the item description once, but can't ask for the current MYSTERY status. However, all corresponding "MYSTERY UPDATE" messages are present in the game's resources, but there are not any corresponding scripts at all.

At 0x16ABBE, one more locked description for an item that is used differently in the final version and never has been locked:

At 0x1680CC, this is a most detailed description for Daphne's role in the game, looking like this must be the first ever game briefing for Daphne (the rest of the messages of her are less informative). Judging from the internal level indexes, this one must be at level 1 instead, so Daphne here must have the very first SNACK description, however, since the level goes as the last one, such a description is not needed anymore, and completely removed from scripts, only texts are left.

At 0x168233, some more unused idle speech messages either for Velma or Freddy, hard to say, they are in between messages for both characters:

At 0x1683B7, an unused copy of messages for Freddy at 0x169626, they are mostly identical except for missing a colon in the first message:

At 0x16980D, here is the message near Velma's speech which asks for help to open the door, but this one is not for Velma obviously. Maybe at some point someone else would ask Velma for help instead:

At 0x169D00, one more final villain speech message, but rather obscene to be used:

At 0x00F561, some unused messages for the also unused RAFT mini-game:

The ROM data lists the password RHGHRWB alongside the others, but entering it doesn't do anything. It was probably meant for the raft minigame, as two other passwords allow you to play the minigames that do exist.