The NES Section Z is a side-scrolling shooter very loosely based on the 1985 arcade game of the same name. (This game doesn't even have a Section Z! What a load.) 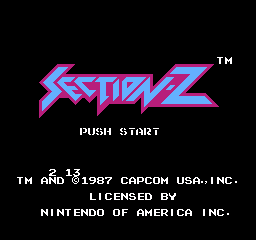 A level select was added to the US version for debugging purposes but disabled in the final release. To reenable it, apply the following patch to the US NES ROM:

At the title screen, pressing any button or direction except Right on controller 2 will make two sets of numbers appear. The game is broken into three areas with 20 sections each; the left digit selects an area, and the right digit selects a section within that area. Press Left to change the left digit, Up or Down to change the right digit, and Right to start at the selected area/section.

Note that there are some issues with the level select, due to either its strictly developmental nature, or the method by which it was reenabled: you always start the game with 00/00 energy, and pressing Right before choosing an area or section will cause the game to freeze.

A happy heart stored at the end of the common enemy graphics. (Only the left half is present in the ROM; this was duplicated and flipped to produce the full graphic above.)

Apparently, the developers got a bit lazy during the FDS to NES conversion process. Rather than spend time rewriting routines that depend on BIOS calls, they decided to include the first 4 KB of the Famicom Disk System BIOS at the end of the PRG ROM. The code and 1bpp font graphics can be found starting at 0x1E010 in an iNES-format ROM.

In the FDS version, the credits scroll, allowing you to see the full sequence. In the NES version, there is no scrolling, so part of the "END" word is cut off.