Twials-- er-- Trials of Mana is the sequel to Secret of Mana, affectionately titled Secret of Mana 2 by international fans of the series (even though that was actually an internal name for Secret of Evermore) for many years. With three paths that vary significantly at places, dozens of possible team combinations, and a very large number of class combinations, it boasts a massive amount of replay value and is widely considered one of the greatest and most technically impressive JRPGs of its time, with this reputation boosted in large part by the fact that it wasn't officially released outside of Japan for decades.

Eventually, however, Trials of Mana finally saw an international release as part of Collection of Mana in 2019, where the game got an official English translation, featuring one Elmer Fudd-infused Charlotte. Better late than never, eh?

Modifying two bytes in the ROM (47BD:07 and 47BF:90 in an unheadered ROM) enables support for playing with three human players, as opposed to just two. The ease of re-enabling suggests that Square was planning to have 3-player support in the game to be consistent with Secret of Mana, but it was disabled for unknown reasons (possibly related to bugs) before release. 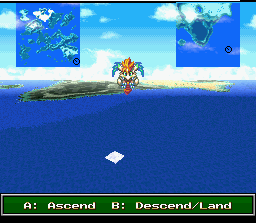 The debug rooms allow the player to access pretty much any major location in the game and battle with any of the undefeated bosses with total freedom. Not only that, you can also view the endings for any party combination and play a whole slew of tunes from the soundtrack available via a music test.

(NOTE: Accessing the debug room could wipe or corrupt your save data, so do this at your own risk.)

First enter the Pro Action Replay (PAR) code 7FEDF23F. Now either load your save data or start a new game. If you start a new game or are not very far in, you may want to cheat a Flammie Drum into your inventory with Pro Action Replay (PAR) code 7E2E9701 in order to speed things up. Make sure you move it into your Ring Menu, since it will appear in the backup inventory.

Now, call Flammie and head toward the southeastern part of the map, off the coast of Navarre. You'll see a small white square in the middle of the ocean, shimmering in the morning light. Have Flammie land here, and you will find yourself in Debug Room 1! 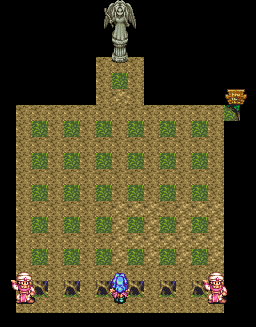 First, you'll be asked whether you want your X/Y coordinates to display and whether you want to save. Each little green square will transport you to a location as listed below (letters indicate the column, numbers the row, just like an Excel spreadsheet), or you can talk to one of the characters at the bottom of the screen. The bottom row of brown tiles and the sign in the top right-hand corner of the screen will take you to Debug Room 2.

The Byzel Dancer at the bottom center of the room does nothing. The Mr. Moti on the left acts as a Sound Test with a whole heap of tunes and sound-effects. Use A to select a track or B to move to the next page of choices.

The Mana Goddess Statue at the top of the screen will let you save your game. Just below her is another green patch of grass leading to a test room called "Miyagawa Test", where you will find a whole lot of nothing and a single Rabite. If you walk up to it and press A, then walk away a certain distance, victory will be declared for some reason. That's it.

Each time you exit and re-enter Debug Room 1, you will get one of three variations. The first is this one; the second and third have no characters or statue, but instead display the main character portraits from the main menu at the top of the screen using the default palette. If you press A while standing in front of them, you can cycle through the different classes, always using the default palette.

Here are the tracks you can choose from in Mr. Moti's Music Test. Playing SErole is not recommended, as it keeps building and could make your ears bleed. Listed below are the track names from the official soundtrack for ease of reference. The internal names and numeric values are as they are listed in-game, including typos. 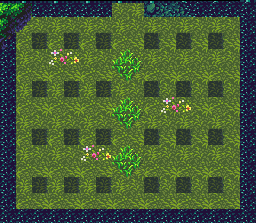 Debug Room 2 allows you to access any bosses that you haven't already defeated, as well as one or two that are always available even if you've defeated them (Jewel Eater and Full Metal Hagger, for example). Again, the tile targets are listed below with letter for column, number for row. The trigger point for the tiles on this screen is slightly above the tile itself for some reason. Taking the upwards exit will take you back to Debug Room 1. Most bosses, once defeated, will lead you back to this room on exiting. Not all of them do, though, so you might need to take the Flammie Express back to the white square.

A couple of squares lead to non-boss locations, and one leads to Debug Room 3. Keep in mind that once you enter Debug Room 3, the only way out is via Flammie.

One thing that's interesting is the fight against Gorva. Normally, you lose one member of your party prior to the fight, but if you initiate the fight through this room you'll be fighting him with your entire crew, and when defeated, a fourth character (which may default to Duran in his first class) will appear briefly and shout that they're alright before vanishing. Also, if you chose to fight Genova and have already defeated him, you can go outside and explore Laurent Castle, with Riesz fainted just outside the room where you fight him. She will talk to you, even if you have Riesz in your party. 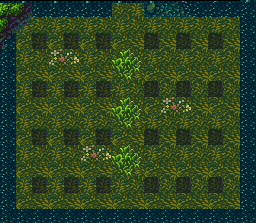 Very similar to the second room, but darker, this contains the rest of the bosses, as well as a couple of enemies in a sparring room or armory of some sorts. This room has no exit. Exiting the room upward will lead you to the Mana Stone of Darkness and the fight with Zable Fahr, as will every tile after the ones listed (so only the first row and the second up to the fourth contain anything unique).

In the Sparring Room, you can exit by going downward, though it's not particularly obvious. Another interesting point worth mentioning is that the music does not always change when you trigger the bosses. 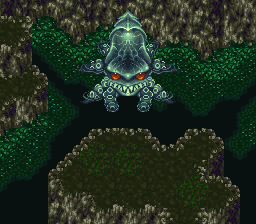 This unused squid boss appears in the map replacement chunks for location 136. The location uses a waterfall caves tileset, and the layout resembles the typical layout of a boss arena. 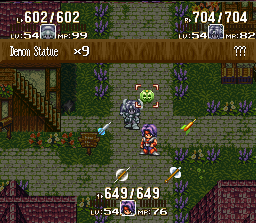 A few unused/unfinished key items lie hidden in the code. None have any effect, and their icons are just duplicates of thrown items/skills.

Evidently, as its name suggests, this would've been... half of a key.

...and this would be the other half.

Perhaps the two Half Keys would've combined into this? No clue where it could have been used, however.

This and the next item come directly before and after the Illusion Mirror in the item list order. The Illusion Mirror is needed to find the Mirage Palace in Kevin/Charlotte's path, so it's very likely this item was intended for a similar purpose along Duran/Angela's path. Presumably intended to open Dragonsmaw?

Not much to say here that hasn't been said above. Probably intended for the Cave of Darkness or Dark Castle along Hawkeye/Riesz's path. 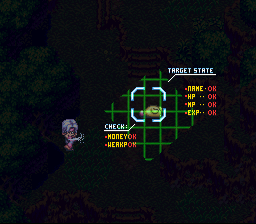 Detect (0x31) was taken out of the game, but the programmers left it within the data. It has a unique icon and battle graphic, but no effect when used during battle. The ability will not supply the player with information on the target monster.

There are reports that the battle system allows for critical hits, but due to a bug are so rare that a player is unlikely to ever see a single one during an entire playthrough. A Google search for "Seiken Densetsu 3" "critical hit" brings up a number of discussions on the subject. There's also a video which captures Kevin doing L1 tech damage during the first hit in battle, before the meter has a chance to charge up.

Perhaps the best clue for critical hits is Kevin's Energy Ball. The Luck stat is stored in three places in the stat blocks: +$000B, +$0052, +$0062. Energy Ball boosts the second to #$32 i.e., 50 Luck (the value may vary depending on unknown factors)...but there's no sign anywhere in the programming where that address ever gets read. It's possible the game reads from another memory location by mistake, making the effect go unused.

In the official Super Famicom Seiken Densetsu 3 strategy guide, Energy Ball is described as absorbing power from the moon into the user's body to increase their critical hit rate. Suffice to say the spell does not work as the developers intended.

When a player or enemy performs a standard attack, there's a random chance to execute the programming at SNES address $D0CAE3-D0CAFA, which will give a 1.5x boost to ATK PWR for that one attack. However, the conditions that allow this are never met: The game picks a random number ranging from $00-64 (101 possibilities), and will give the boost if the value stored at a certain memory address is greater than the random number. Problem is, the memory address in question was just initialized to #$0000 a few operations earlier.

It's unclear if this boost was intentionally disabled, or a bug. If it's the latter, the correct odds for the boost remain unknown.